You've probably seen Raymond J. Barry '61 a dozen times on TV and in movies without realizing it's the same guy. The Long Island-born character actor costarred with Tom Cruise in Born on the Fourth of July and enjoyed top billing over Brad Pitt in a 1992 episode of Tales From the Crypt that's now making the rounds on YouTube. For more than twenty years, Hollywood has relied on Barry to deliver gruff gravitas to hard-hitting dramas. It wasn't until last year that he made his first foray into full-blown slapstick at age sixty-eight. 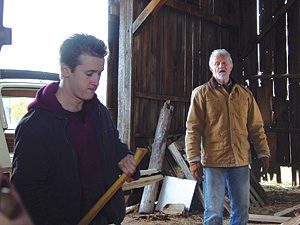 In the Johnny Cash bio-pic parody Walk Hard: The Dewey Cox Story, released on DVD in April, Barry plays a stern father who's never forgiven his son Dewey for killing his favored brother during a childhood mishap. In their final confrontation, Barry's character accidentally cuts himself in half with a machete. The actor's challenge: how to deliver lines with a straight face when his waist is seemingly planted squarely on the floor and his legs stand upright a few inches over.

Relaxing in the West Hollywood condominium he shares with his wife, Robin Mundell, and their two children, Barry explains his approach: "Walk Hard is an absurdist film. If I leaned into it, I would have killed the comedy." He compares it to Brendan Behan's play The Hostage. "The guy gets killed, then all of a sudden he gets up and sings a song," Barry says. "There's a sort of Brechtian logic to it. Walk Hard—same thing."

Finding a Brechtian inspiration for a lighter-than-air spoof comes naturally to the one-time philosophy student who caught the acting bug at Brown and gravitated to edgy dramatic fare. On campus in the late fifties, the Long Island native was a top-scoring running back for the Bruins. But Barry's NFL career plans got waylaid during his junior year when a professor cast him in a production of William Inge's Picnic. "They needed a football player," Barry says. "I was a football player. All my buddies from the team came and sat in the back of the theater and laughed their asses off at how bad I was. And truly, it was laughable."

After graduation, Barry attended Yale Drama School for a semester and then moved to New York City, where he studied method acting with legendary teacher Uta Hagen before diving into experimental theater. Touring with the avant-garde Open Theater troupe, Barry recalls, "We met Eldridge Cleaver and Timothy Leary in Algiers. We performed at the Sorbonne right after the 1968 student riots. In Milan revolutionaries with red bands around their heads invited us to do our play in this museum which they had 'captured.' We performed in the desert in Iran and met Samuel Beckett in Germany. In London, the psychiatrist R.D. Laing came to all our productions and would have us over for these all night parties at his apartment after the pubs closed. It was amazing, man."

Creatively challenged but poorly compensated, at age forty Barry found himself moonlighting as a plumber to support his acting habit. In 1985 he moved to Los Angeles to capitalize on his first big movie, Year of the Dragon. "I wanted some bread so I could send my daughter to college," he says, referring to his now thirty-five-year -old daughter from his first marriage.

Born on the Fourth of July and Dead Man Walking, in which he played a grieving father, led to a trilogy of now-classic "Little Green Men" X-Files episodes along with dozens of dramatic film and TV projects. Barry took acting classes with Brad Pitt; wrote the play Once in Doubt, which won the 1990 Drama Critic's Circle Award; and earned a 2006 Independent Spirit Award nomination for his bravura turn as a tough Midwestern uncle in the indie film Steel Town.

With five movies slated for release this year, Barry says a part of him still hankers for more mainstream recognition. "But you know what?" he says. "I'm really happy. Not everyone can be Marlon Brando. Enough people know who I am. I go to my son's basketball game and the other fathers look at me: 'You're an actor aren't you? I've seen you on TV!'

"What do I want—to take over the world?" he says. "I want the income to send my kids through college and I want dignity, man."