Power To The People

Evo Morales' extra-ordinary rise from impoverished peasant to the first indigenous president of Bolivia began on a soccer field. It was 1980, and Morales along with his family had just moved from their hometown in Bolivia's western highlands to the central tropics in search of work. He went to a local soccer field where, as it turned out, members of the local cocoa growers union were playing. 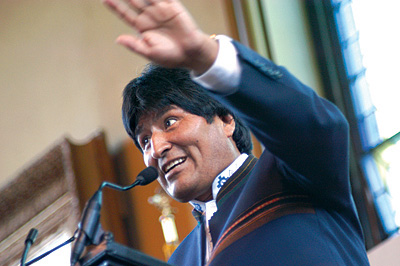 Frank Mullin
"I said 'Can I play?' They said, 'Sure,'" Morales recalled in a speech at Brown in late April. "It turns out I was the best player on the field." He was made head of the squad, but more importantly, as he said, "it was the beginning of my being involved in the union."

Over the next two decades, Morales, now forty-eight, forged a career for himself as a union organizer, activist, politician, government dissident, and thorn in the side of the United States. He has expressed admiration for Che Guevara and Fidel Castro; joked that the coca leaf, which is used to produce cocaine, should be his country's new national flag; and called U.S. capitalism "the worst enemy of humanity."

In his talk, one of this year's Stephen A. Ogden, Jr. '60 memorial lectures, Morales largely steered clear of his controversial political views and instead focused on his own life story. "Never in my life had I thought of being a leader, much less president," Morales, an Aymara Indian, said through a translator. "I reflect at times how life can change."

Morales said the years he spent working for the union in his twenties were formative, teaching him "to understand that the economic situation [in Bolivia] benefited just a few families." In the early 1980s, two brutal dictators—Luis Garc√≠a Meza Tejada and Celso Torrelio—ruled Bolivia, and Morales said a turning point in his life came when he witnessed an indigenous farmer who was burned to death by a group of drunken government soldiers. Morales had been pulled out of school by his father in sixth grade and said he never learned about democracy or justice. Now though, he said, "I began to understand what human rights were."

Bolivia, which remains South America's poorest country, drifted back toward democracy during the rest of the decade, but these were also the years that the United States, as part of its war on drugs, began helping the Bolivian government eradicate the coca crop. The crop was a staple of Bolivian farming and widely used in tea or chewed as a mild energy booster. Morales said he saw U.S. drug enforcement agents "exercising control" over Bolivia's army. "What upset me the most is that they were giving orders to the military," he said. "This was a question of dignity and sovereignty." According to Morales, the U.S. ambassador also enjoyed control over a local airstrip and prevented him and other Bolivians from using it.

Morales organized demonstrations and resistance efforts against the crackdown on coca, and was often jailed. He was once nearly beaten to death by government forces and left for dead in the jungle. By the mid-1990s he was convinced, he said, that the campesinos needed to form a political party "to defend our land, to defend our rights, to defend our territory, and to defend the coca leaf." Thus was born the Movement for Socialism or MAS. "What do I understand socialism to mean?" Morales said during his talk. "Equality among human beings."

In 2002, Morales placed second in the presidential election. Three years later he won the post, riding to victory on a wave of anti-American sentiment and becoming the first Indian to rule the country since the Spanish conquered Bolivia in the 1500s.

He has since nationalized Bolivia's oil and gas industries, required schools to start teaching the country's indigenous languages, and increased pensions for retirees. "This is a historical struggle," Morales said. "It's impossible to make reparations for the last 500 years of injustice, but we make progress little by little."

Reader Responses to Power To The People