The disoriented patient came into the emergency room having severe difficulty breathing. Clad in his customary white smock and with a stethoscope dangling around his neck, Mark Stamoulis ordered up an X-ray, EKG, and echocardiogram. He could see that the problem was with the patient's heart, and the symptoms suggested a clot in the pulmonary artery. Stamoulis administered drugs and then inserted a catheter into the patient's chest to deliver medication that should dissolve the clot. But fluid was rapidly building up around the heart, and the clot refused to dissolve. Stamoulis did what he could and then hoped for the best. A day later the patient was dead. 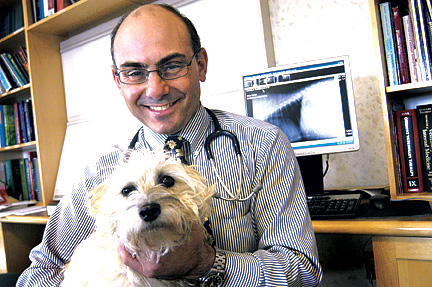 The scene, tragic yet unremarkable in most hospital emergency rooms, was unusual because the patient was a cat. Stamoulis is among a small cadre of veterinarians trained as pet cardiologists. Over the years he has treated dogs, birds, camels, goats, sheep, arctic foxes, leopards, lemurs, and monkeys, applying to these animals the same technology used to treat humans. His services are expensive. Installing a pacemaker in a dog or cat runs around $3,000, Stamoulis says. But many people find his services are invaluable. "I love being able to provide an extra level of care for these animals as a specialist," he says. "And right now, with this economy, animals are the silent sufferers."

Stamoulis trained as a veterinarian in the mid-1980s at Tufts' Cummings School of Veterinary Medicine in North Grafton, Mass. "I was also very interested in medicine and technology," he says, "especially echocardiography and ultrasound." Pet cardiology seemed the ideal way to go. "I realized that the future of veterinary medicine was in specialization," he explains. There are roughly 62,000 vets nationwide, but only 150 are heart specialists. Stamoulis believes the time and cost of being trained for the job—four years at veterinary school, one as an intern, and three in residency—drive prospective candidates away.

Stamoulis splits his time between clinics in East Greenwich, R.I., and West Bridgewater, Mass., where he sees 15 to 20 patients per day. He says the animals he treats are now living twice as long compared to those he saw ten years ago, thanks to structured clinical trials of new cardiac medications. "I've been treating a terrier named Mase for three years now," he says. "In the old days he may have lived only six months." Mase takes eight different medications daily and spends a few hours a day in a specially designed cage that fills with oxygen and makes it easier for him to breathe. "We regularly drain fluid from his abdomen," Stamoulis adds.

Recently, Stamoulis, who is Rhode Island's only pet cardiologist, has helped care for animals relocated from Hurricane Katrina. He also does a lot of charitable work in shelters. "I personally don't charge shelters because I think that their money is better used for food and other care for the animals," he says. What he enjoys most, he adds, are chronic cases in which he works with the same animal for years and can see the result of his work in the joy an owner takes in the pet's extended life.

Stamoulis says the next major step for animal care is using genetic tests to breed out and eventually eliminate diseases afflicting our pets. "It's incredibly gratifying to see human procedures that were tested on animals coming back to help the animals, too," he says.