Not a Straight Line

In 1995, while attending an unleash-your-inner- creativity retreat in Buffalo, N.Y., William Frost was led to a courtyard with lots of large colored spikes sticking out of the ground. Frost and a half-dozen other people grabbed Native American hoop drums and began pounding out a steady beat. They then walked between the nails, following a path that wound its way back and forth, gradually making its way to the center of what was a 45-foot-wide labyrinth. "Boom, boom, boom—with each beat of the drum, we took a step," Frost recalls. "Slowly, the vibration of the drums, the beating of our hearts, and what people think of as the higher vibration of the labyrinth all came together. From that moment on, my energy was forever altered." 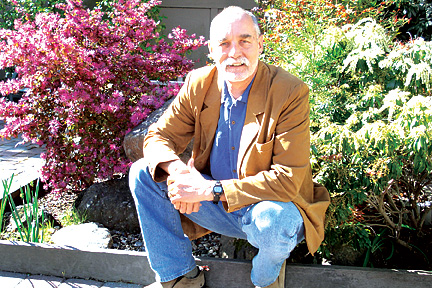 Although labyrinths have been around at least since Daedalus built one to contain the Minotaur, they have become a hot commodity among New Age enthusiasts. Labyrinths—not to be confused with mazes—have for centuries been symbols of religious pilgrimage and the difficult journey toward God. Egyptians, Native Americans, Indians, and medieval Europeans all had their versions. The floor of Chartres Cathedral has a circular 39-foot-wide labyrinth that dates from 1200. Penitent sinners would crawl along the stone path to its center, in the hope of getting closer to God, sometimes by symbolically enacting a pilgrimage to Jerusalem.

These days labyrinths are often built as disorienting spaces with meditative and even health benefits. There is even a Labyrinth Society, which, along with a group called Veriditas (whose World-Wide Labyrinth Project seeks to "transform the Human Spirit ... around the Labyrinth Experience as a personal practice for healing and growth, a tool for community building, an agent for global peace and a metaphor for the blossoming of the Spirit in our lives") has a worldwide labyrinth locator on the web (labyrinthsociety.org).

Frost has been studying and building labyrinths ever since his 1995 transformative introduction to them. As a "meditative space designer," Frost maps out plans, and if the client desires, builds labyrinths for anywhere from a few hundred dollars to $20,000. "Labyrinths seem to show up in history when they are most needed," Frost says. "We are at an unprecedented time of strife and war. The labyrinth is sorely needed to help people slow down, notice their breathing and what their mind is doing, and come to a place of inner peace." 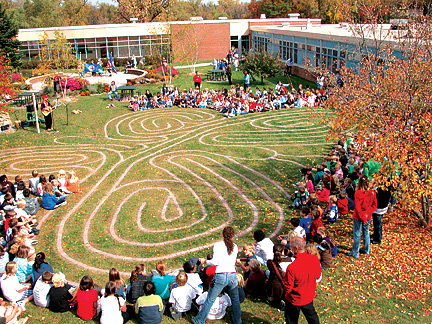 Photos courtesy William Frost
A butterfly labyrinth Frost designed at a school in Minnesota.
Labyrinths are often confused with mazes. The difference is that mazes direct you through turns that often take you to dead ends while labyrinths follow a single straight path that takes the walker inexorably toward a center. In 2007, Frost designed a maze for the arboretum at the University of Minnesota. "Designing a maze put me in as much as a confused tizzy as designing a labyrinth puts me in a beautiful serene place," says Frost, who has a master's degree in landscape architecture. "When I was done with the arboretum maze, my wife said never again. It sent me to this devious place inside of me that she didn't care to be around."

Traditional labyrinths are typically round, but Frost has branched out to make them in the shape of butterflies, dolphins, hearts, frogs, bears, and even a pink flamingo. Frost says corporations use his labyrinths to help their employees become more creative. "You feel like you have this huge metaphorical funnel coming into the top of your head," he says. "Ideas start flowing through you." Some schools have also hired Frost to build labyrinths, which he says seem to help kids with attention deficit disorder to concentrate.

Then there are the individual clients, such as the woman who wanted a labyrinth in which she could ride her horse. It wound up being 200 feet in diameter, the largest one Frost has built.

Soon after he returned from the Buffalo retreat, Frost created two labyrinths on his own 35-acre estate in southern Minnesota, the first a 155-foot-wide circular one he hand-mowed over the baseball diamond he'd built for his kids, and the second a 60-foot-long labyrinth in the shape of a bear. At the center of it stands a single pine tree. (Frost has since moved to North Carolina.)

"A labyrinth is a metaphor for the journey of life," he says. "You think you're on course, then you're off course. But the truth is you're always on course to the center of yourself."

Photos of Frost's work can be found at www.williamfrost.net

Reader Responses to Not a Straight Line