Late one night in the spring of 1986, Susan Jane Gilman and a Brown classmate sat at the International House of Pancakes on Thayer Street, staring at the "Pancakes of Many Nations!" placemats. The women had had way too much to drink and were feeling the invincibility of college seniors about to be set free. Inspired by IHOP's menu, they hit on a plan: they would circle the globe together, eating the pancakes of many nations in those many nations. Well into the wee hours of the morning, the two seniors giggled and listed the places they wanted to visit: Thailand, Bali, Marrakech, Greece, Paris.... The possibilities seemed limitless. 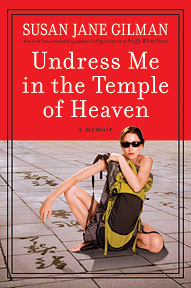 Gilman went home to New York City, waited tables all summer to rustle up some money, and got an extension on her student loan payments. In the fall she and her friend flew to Hong Kong, their backpacks stuffed with Lonely Planet travel guides and two cameras, which promptly broke.

Planning to spend a year traveling, the women decided to start in China and work their way south through Bali and Thailand before heading west. But even before they set foot in mainland China, the jetlagged Gilman dissolved into homesickness. The two were staying in a cheap guesthouse in Hong Kong's Kowloon section, where they'd had their first encounter with squat toilets and had freaked out at the sight of ants in the shower. Gilman called her parents in tears, ready to fly home.

Nearly a quarter-century later, she has written a memoir that is a testament to the power of travel to wrench us out of our comfort zones, to rattle our preconceptions like so many loose nuts and bolts, and to leave us to reassemble our view of the world and our place in it.

As she did in two earlier, hilarious memoirs, Kiss My Tiara and Hypocrite in a Pouffy White Dress, Gilman describes her working-class urban roots, this time contrasting them to the origins of her wealthy friend, whom she calls "Claire Van Houten" to underscore their class differences. Still, both women begin their journey as ugly Americans—brats, really. "Wow. Plumbing—as brought to you by Charles Dickens," Gilman quips when confronted with a hostel's shower, a concrete cube with a bent pipe jutting out of the wall. Van Houten doesn't see the humor; she's panicked at the lack of a shower curtain. "Don't look," she begs as she undresses. "Please. My thighs are a nightmare."

In 1986, Western tourists were rare in China, and the women drew crowds of curious locals fascinated by their big noses and pale skin. Under constant scrutiny, Van Houten falls apart. Whether from the emotional strain or the malaria pills she is taking, she becomes paranoid and hallucinates that the CIA, the FBI, and the Mossad are after her. In southern China she bolts. With good reason Gilman fears that if the Chinese officials discover Van Houten to be mentally ill, they will lock her up.

Gilman's story could have been just another self-indulgent saga of overeducated and under-experienced Americans discovering that the world is more complex than they knew, but Van Houten's breakdown changes everything. Forced to take charge of the situation, Gilman grows up fast, cashing in her clever banter and girlish giggles for the richer currency of responsibility. It's a good trade.

Reader Responses to Growing Up, American-Style