Shortly before the Nazis invad-ed Poland, they came up with the idea of deporting all the country's Jews to Madagascar. In Warsaw's Yiddish cabaret clubs, Jewish entertainers mocked the idea in a song called "Oy, Madagaskar," which had such memorable lines as "It's like a shvitz [sauna], but out-of-doors." A few years later, of course, no one was laughing; the Nazis had scrapped the Madagascar plan in favor of the Final Solution. 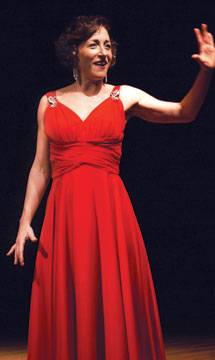 Oori Noy Meir
Cantor-turned-chantenuse Rebecca Fletcher in her new cabaret show, Cities of Light.
Thanks to cabaret singer Rebecca Joy Fletcher, "Oy, Madagaskar" is back. A professional cantor and chanteuse, Fletcher uses such long-forgotten Jewish songs as the basis for her cabaret shows. To write her 2007 show, Kleynkunst!, she researched Yiddish cabaret in the 1920s and 1930s, at a time when it thrived in Warsaw's "kleynkunst" or "little art" theaters. In Cities of Light, Fletcher turns her focus in part to Tel Aviv's cabaret culture in the decades leading up to the 1948 founding of the state of Israel. A heady brew of German expressionist music and Russian performance style, Cities covers topics ranging from Zionism to Communism to bawdy jokes.

Fletcher says she is fascinated by cabaret's juxtaposition of "light and dark emotions": "The range of human emotions is put together almost chaotically and displayed in all of its contradictions." Fletcher, who concentrated in English at Brown, says she became passionate about old Yiddish songs during her final year at cantorial school at Hebrew Union College in New York City. There she also discovered she loved the style of cabaret that blossomed in Weimar Germany between the wars, with its modernist music and embrace of decadence. Kleynkunst! combines both influences, featuring a Yiddish version of Kurt Weill's "Mack the Knife" and the all-too-prescient song "The Last Jew in Poland," about what happens to the country when all the Jews are gone. Kleynkunst! premiered at New York City's 92nd Street Y in 2007 and at the National Yiddish Theatre–Folksbiene, with Fletcher and performer Stephen Mo Hanan costarring. New York Times critic Lawrence Van Gelder praised Fletcher's "richly rounded and eventually heartbreaking performance."

Fletcher chose the song "Oy, Madagaskar" because "it's that line between you're laughing and you're getting really creeped out." The song actually references a number of racial stereotypes. "It's pretty politically incorrect," she says. "It's talking about being with the 'savages' of Madagascar because they're less savage than the gentiles in Poland."

Last summer, Fletcher traveled to Israel, where she lived as a teenager, to research the history of cabaret in Tel Aviv. The Jews who immigrated there brought with them the European cabaret tradition, and shows sprouted in the city's restaurants, cafés, and function halls. Fletcher says a typical act could feature vaudeville skits, send-ups of the British officials who then ruled Palestine, and soaring pro-Zionist ballads. Political messages were often contradictory, with pro- and anti-Communist songs performed in the same show. Strangely, there's little mention of the Arabs then living in Israel. Fletcher believes this may be because the Jews were worried British censors wouldn't allow controversial material on stage. She says it may also be the result of the Jews primarily wanting to celebrate their achievement in building up a new city in the middle of a desert, rather than to dwell on the Arabs.

"They were so profoundly proud of this modernist enterprise called Tel Aviv," she says. "Jews were not only farmers and swamp drainers, but café owners and government officials—that's chic!"

Lawrence Goodman is the BAM's senior writer. Videos of Fletcher performing are at www.rebeccajoyfletcher.com.