The View from on High

I walked a lot when I was at Brown: along Thayer and Brook streets, to Spike's, Dunkin' Donuts, and Ocean Coffee Roasters; to the OMAC, the G.C.B., Loui's, and Prospect Park; to the water, from the water, and—sometimes—to class. 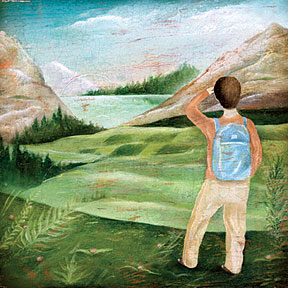 In low-lying Rhode Island, of all places, I became interested in mountains, real ones made of rock and dirt—as opposed to the steep slope of freshman angst. I spent a lot of time earnestly thinking and reading about mountains, and, increasingly, hiking them in New England, and, during the summers, out West and down South.

Why mountains? Maybe because they are beautiful and difficult: qualities I find attractive in places and people. I left school midway through my junior year to hike the Appalachian Trail from Georgia to Maine, and walked through three pairs of boots and years of mental debris along the way. I finished on August 21, 2003, and returned to Brown a week later, leaner and quieter.

Uncomfortable now with sidewalks and fluorescent lights, I turned to trees, more mountains, and an odd pursuit called "high-pointing." A suitably obscure, arbitrary, and difficult distraction from my vaguely existential anxieties, high-pointing would take a lifetime to complete. The goal is to reach the highest natural point in every state, from Florida's 345-foot Britton Hill to Alaska's 20,320-foot Denali Peak.

Having bagged five state high points along the Appalachian Trail, I now set about pursuing the remaining forty-five. Rhode Island's high point, Jerimoth Hill, is an 812-foot bump just off Highway 101, near the Connecticut border. I waited until one of the national holidays during which the owner of the abutting private property permitted hikers to cross along his short gravel path to the hill's "peak," which I found draped with prayer flags. Next I climbed Vermont's Mt. Mansfield, Connecticut's Mt. Frissell, and Massachusetts's Mount Greylock in rapid succession with a long-suffering girlfriend who had stayed with me through my Appalachian odyssey and humored my new obsession. After we broke up, I spent the next summer in Boulder, Colorado, and hiked up 14,440-foot Mt. Elbert with a classmate from Denver I barely knew.

Driving east at summer's end with my oldest friend (also a Brown classmate), we stopped to climb Kansas's Mt. Sunflower—an imperceptible hill along the Colorado border, on top of which a plaque deadpans, "Nothing happened here in 1897." In Missouri we then ascended Taum Sauk Mountain by a short concrete path off a parking lot. Both peaks are, conveniently, just off I-70. (We also stopped at Graceland.)

By the time I graduated from Brown, I'd stood upon twelve state high points. I've notched five more since then, including Hawaii's snow-covered Mauna Kea, the tallest mountain on earth, at 33,476-feet—if you measure from the ocean floor—with three of my closest Brown friends.

A few years ago in New Mexico, where I live now, I trudged up 13,161-foot Wheeler Peak, the state's highest, with a former girlfriend. She took genuine interest in the pursuit, and in me. We walked a lot together, and Wheeler—beautiful and difficult, like her—was one of many peaks we stood atop before eventually heading our separate ways. It was a high point that happened to occur in a high place—and that's something else altogether.

At this rate, I'll reach my fiftieth natural high point when I'm sixty, an age I can't imagine being. Whether I make it up Denali or not though isn't what matters: I've already gotten the perspective I needed.

Charles Bethea is a freelance writer splitting time between Atlanta and Santa Fe.

Reader Responses to The View from on High