Alaska is America's final frontier, a harsh, mythic land that beckons seekers of everything from independence to remoteness to a stripped-down life spent closer to nature. Miranda Weiss is one of those seekers. Soon after graduating from Brown, Weiss, a Maryland native, moved to Homer, Alaska, a seaside community of 5,000, "in search of some indefinable hybrid of adventure, wilderness, and what I imagined to be a simpler life." Her new memoir describes her first few years there. 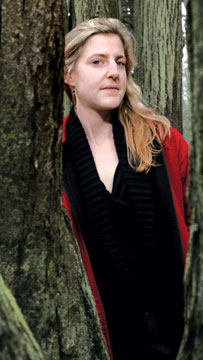 Marcus Hanschen
"What does it take to be at home in nature?" Miranda Weiss ask in her Alaskan memoir.
A biology concentrator at Brown, Weiss exudes passion for the natural world in her lyrical descriptions of land and sea, as in this passage about an incoming tide: "As the bay came back in, it pushed countless jellyfish towards the shore. Some were clear with deep orange centers, others just gave off a moon-white glow. They trailed long ragged tentacles and could have been a fleet of spaceships making their way home."

But Weiss's keen observations are not just elegant writing; they are a means of adaptation and survival. "I was surrounded by people who boasted local know-how and carried around the knowledge of fish, tides, boats, and weather like ballast," she writes. "This was how people navigated this place, and how they possessed it. And from the moment I arrived, gaining this knowledge seemed the only way to feel like I belonged." By collecting on paper the knowledge that locals take for granted—how to recognize the fluting of a hermit thrush, for example, or fish for salmon with dip nets, or skin an otter that's washed up on shore—Weiss is trying to figure out if she can call Homer home.

Despite her desire for connection, Weiss draws the residents of Homer much less precisely than she does its wildlife. Though she has moved to Alaska to be with her boyfriend, for example, he is here an occasional quick brush stroke on an otherwise meticulously painted canvas of moose tracks, spouting whales, and salmon runs. And while Homer seems overflowing with characters who would make a short-story writer swoon, Weiss dedicates only brief passages to them. These pithy sketches may leave some readers wishing she had depicted the humans who populate her new world as dynamically as she portrays its birds, forests, and sea creatures.

But then, perhaps that is her intention. The land defines the people of Alaska. Only by gaining this intricate knowledge of the ecosystem around her can Weiss discover whether there is a place within it for her.