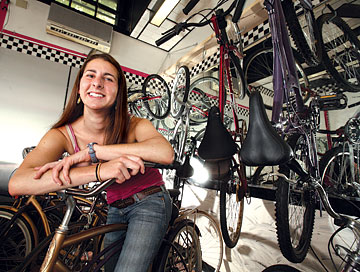 Last December, Carly Sieff '09 got it into her head that her fellow students needed to ride their bikes more. So, along with several other students, she bought seven new bicycles and formed Bikes@Brown. For a yearly five-dollar fee, students could sign up to rent a bike for two days at a time. Soon students were using the bikes to go to the supermarket, to enjoy a night out in the city, and even to take a long ride along the East Bay Bike Path that runs from Providence to Bristol. Demand was so great that the group added eleven more bikes to their stock by the end of the school year and it now plans to buy more in the fall. "I enjoyed biking around campus, Providence, and Rhode Island so much," Sieff says, "that I wanted other people to have the same appreciation of what's around them."
What do you think?
See what other readers are saying about this article and add your voice.