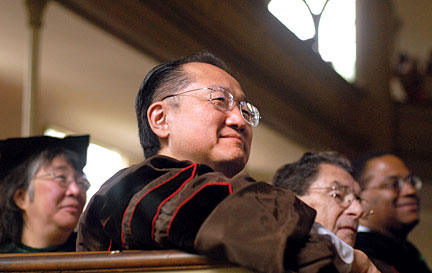 A trustee emeritus and chair of the Boldly Brown Campaign's financial aid initiative, he chairs the San Francisco Ballet's board and is former vice chair of Capital Group International.

A peace activist and anthropologist best known for her studies of Mayan women in Mexico, she was the first anthropologist hired on staff at the World Bank.

An engineer, he is president and chief executive officer of Analog Devices, which specializes in data conversion and signal conditioning technology.

President of the Washington, D.C.–based Center for Advancing Health, she is the author of Behavior Matters and AfterShock: What to Do When the Doctor Gives You—or Someone You Love—A Devastating Diagnosis.

President-elect of Dartmouth College, he cofounded Partners In Health and headed the World Health Organization's HIV/AIDS initiative. He received a MacArthur "Genius" Fellowship in 2003.

Editor of Newsweek International and a regular columnist for Newsweek magazine, he hosts CNN's Fareed Zakaria GPS, a weekly foreign affairs program. He is the author of The Post American World and The Future of Freedom.

Reader Responses to The Magnificent Seven