It's almost mandatory for students to carp about cafeteria food. But foodies and twin sisters Annie and Connie Wu '13 think their peers need to work a little harder and complain a little less. "It gets boring because you let it get boring," Annie says.

The Wus, who grew up in the San Francisco Bay Area, help their fellow students make great meals out of dining hall food on a blog they call the Ratty Gourmet. Their posts treat Brown's cafeterias like well-stocked kitchens, in which the women cruise the food stations and gather ingredients as they go.

One afternoon this fall Connie assembled a plate of fixings that would have done a Food Network stylist proud. She arrayed mounds of tuna, chopped onions, peppers, and scallions alongside spoonfuls of relish, sour cream, and mayonnaise. While Annie peeled and chopped a hard-boiled egg from the all-day breakfast bar, Connie mixed ingredients in a drinking glass, seasoning them with lemon juice, pepper, and garlic powder. 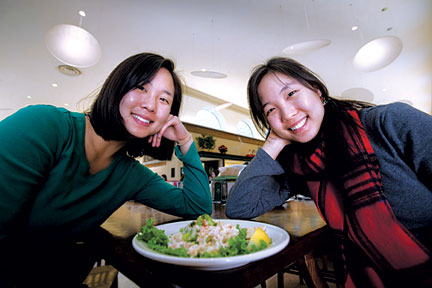 Annie and Connie Wu use the Ratty as their test kitchen.
Scott Kingsley

"The end product always looks nice, but there's a lot of mess along the way," Connie said, spooning the dip from the glass onto a plate lined with lettuce leaves. "That's the way it's gotta go." She scattered scallions over the tuna and tore open a few packets of crackers she'd snagged from the soup station.

Annie then ran off to the condiment bar, where she sprinkled a little paprika on top of the creation. "There," she said. "It's holiday-spirited now." She got out her camera and started to photograph the plate. "What do you think?" she asked Connie, as the two squinted at the viewfinder. They rearranged the crackers around the tuna and turned the plate a bit.

The twins started their first food blog in high school. "We'd photograph the lunches we packed for school. And we baked a lot at home," Annie says. As avid readers of other food sites, they've received advice from more seasoned bloggers. One recommended photographing the food on white plates and using natural light, both of which are easily accomplished in the Ratty.

The Wus are also food insiders—both work for Brown dining services. "We know what ingredients are best," Annie says, pointing disapprovingly toward the American cheese by the hamburger station. "They fresh-slice the cheddar," she confided. "It's much better."

The sisters are particularly enthusiastic about the caramelized onions at the Ratty's occasional baked-potato bars, though they prefer to divorce them from the baked potatoes and marry them to panini with cheese and artisanal bread from a local bakery. The Wus also use the Ratty's panini presses to grill quesadillas.

Despite their enthusiasm for cooking, neither of the women envisions a food career; both plan to become doctors.

Read the Ratty Gourmet at http://rattygourmet.blogspot.com/