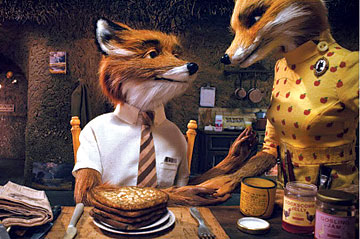 Among the producers of this winter's whimsical Fantastic Mr. Fox is Allison Abbate '87, whose previous animation credits include Tim Burton's The Nightmare Before Christmas. Directed by Wes Anderson, Mr. Fox is based on Roald Dahl's story of a middle-aged vulpine family man who longs for the thrill of his chicken-thieving youth. New York Times critic A.O. Scott observed that Anderson, director of The Royal Tennenbaums and The Darjeeling Limited, has "turned Dahl's tale of woodland derring-do into another melancholy, comical study of the dynamics of a loving, difficult family." Scott observed that not everyone will like Fantastic Mr. Fox, but that "there are some children—some people—who will embrace it with a special, strange intensity, as if it had been made for them alone."