BAM Tell us about your role in In the Next Room. 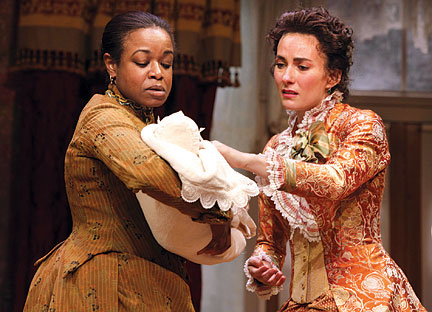 In In the Next Room, Quincy Tyler Bernstein is a grieving mother hired as a wet nurse.
Joan Marcus
Quincy Tyler Bernstine I play an African American woman named Elizabeth. She is a young mother who lost her youngest child about two weeks before you see her in the play, and she's volunteered essentially to be a wet nurse for this white couple.

BAM And how does that work out for her?

Bernstine She is the voice of reason in the play. She sort of becomes a mother to the couple's baby. She's very grounded and beautiful in that way, I think.

BAM In both this play and Ruined you play women who've recently lost children. What draws you to such roles?

Bernstine The thing about these women is that they keep going. That is what is so inspiring about them. I don't know how I would be able to move on. Of course, I think about how much my mother loves me, and I think about what it might be like if she for some reason lost one of us, God forbid. I sort of used my own mother's love as a basis for creating these characters.

BAM Did you act much at Brown?

Bernstine I was a public-policy major and acted in my spare time. I was actually on my way to law school, and [theater arts professor] Lowry Marshall, whose acting class I was taking, suggested that I audition for graduate school in acting, just to see what would happen. I auditioned for grad school and I got in, so the rest is history.

BAM Both Nottage and Ruhl studied with playwright Paula Vogel at Brown. Do you see any similarities in their work?

Reader Responses to Her Greatest Roles