"It's a teaching building," Susan Alcock said. "You can learn a lot just by wandering around." Alcock, director of the Artemis A.W. and Martha Sharp Joukowsky Institute for Archaeology and the Ancient World, was giving a tour of the institute's newly completed home in Rhode Island Hall. She gestured toward a carved stone wreath in the hallway. "That's from Petra," she said. "I fell for this wreath like a ton of bricks."

It is one of several artifacts on loan from Jordan, where professor emerita Martha Joukowsky '58 spent fifteen years excavating the Great Temple at Petra. Upon her retirement in 2007, her husband, chancellor emeritus Artemis Joukowsky '55, says he finally felt free to endow an institute for archaeological research and teaching at Brown. To house it, Ruth Simmons offered Rhode Island Hall, the Greek Revival classroom building that anchors the southwest corner of the College Green. The site was apt: as undergraduates the Joukowskys had met there in a botany class. In addition, Martha Joukowsky's grandfather, a Brown professor, had worked and even lived for a time in Rhode Island Hall. 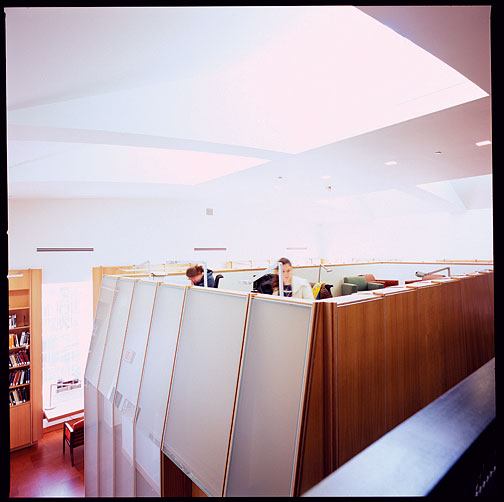 Alcock runs the institute. A vibrant former MacArthur fellow who specializes in classical archaeology and history, she too worked on the Great Temple at Petra. She also surveys for artifacts along the Vorotan River, a trade route that ran from Iran through Armenia.

For the past couple of years, however, Alcock has been involved in a different kind of excavation: Rhode Island Hall needed to be gutted—down to its fieldstone rubble walls. The roof and windows were fine, says architect Nick Winton '85, but an ugly hodgepodge of classrooms and offices had been improvised inside over the course of a century and a half. Even the exterior walls needed a metal skeleton to stabilize them.

Gutting the building gave the architects free reign to reinvent it, says Winton, whose firm, Anmahian Winton Architects, of Cambridge, Massachusetts, was asked to give the institute a contemporary feel. "[The University] wanted to stay away from the tweedy, dusty image of archaeology," he says. Light was key. Thanks to tall sash windows and enormous skylights, the building now gets plenty of sunlight, and the architects played on the tension between the building's historic classical exterior and the new airy, modern space inside.

For interior walls Winton used quartersawn white oak plywood and translucent white glass, materials that helped contain costs while achieving LEED silver certification, the environmental standard for all new construction on campus. The floors are cork, and the classrooms are "smart," which means a professor can control the window shades, electrical lighting, and projection system from a central computer built into each lectern. The heating and cooling system is similarly high tech, adjusting shades according to the availability of daylight and using weather forecasts to anticipate and control the flow of hot and cold water through the building. 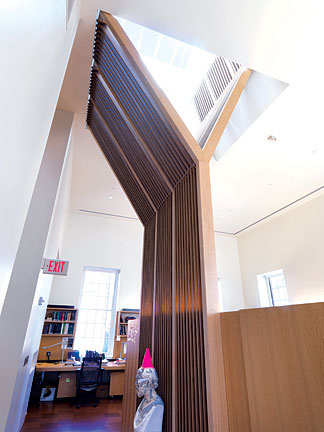 "I'm a firm believer that great spaces make great work possible," Winton says. The building's first floor is largely open, with exhibit space and a fifty-person classroom that can expand for larger gatherings (its interior wall retracts into the ceiling, opening the room to the main hallway). A group of undergraduates built rough-hewn benches and tables from some of the building's original timbers. Alcock says her sole demand was that the furniture be strong enough for grad students to dance on. "This is a joyous kind of community," she says.

The Joukowskys' only request was for a reading room. The heart of the institute is the second floor, on which a core of glass-walled faculty offices is ringed by a library-in-the-round, which eventually will house the records of Martha Joukowsky's Petra excavations and more artifacts from her collections. At one end of the building a screen of plywood strips creates a nook for reading or conversation. At the other end a treelike plywood structure arches over a study space for graduate students. "We wanted it to be like a studio," Winton says, observing that too often grad students are isolated by their studies. "Here they can come and go," he notes. "It's a little bit of social engineering."

Alcock and her colleagues—who include a cross section of University departments and collaborators from around the world—wanted a space that not only welcomes, but actually encourages informal communication and interdisciplinary exchanges. She delights in the symbolism of the building's two front doors, one opening toward the city and the other toward the main campus.

Climbing the stairs one day last fall, Alcock grinned widely when she caught the sound of several simultaneous conversations taking place outside the faculty offices. "I love this," she said. "Listen to all the voices."