We all love being right and hate being wrong. But why? This is the question that drives journalist Kathryn Schulz ’96 in Being Wrong: Adventures in the Margin of Error. Schulz wants to understand how we cope when "our convictions collapse out from under us" and to know why as a culture we experience mistakenness as a flat-out negative: embarrassing and shameful. This strikes her as more than odd, since confronting mistakenness is actually how we change and grow—and become unmistaken. 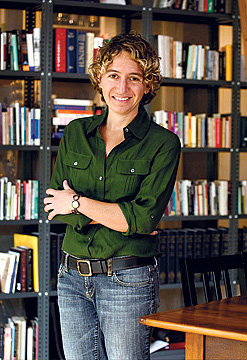 Schulz takes readers on an intriguing excursion through the landscape of error, from falling for a mirage to falling for the wrong love, from wrongful convictions to wrong predictions. She leads us from the Canadian Arctic to Wall Street, demonstrating that of all our mistakes, our negative conception of error is the gravest. "It is our meta-mistake," she writes. "We are wrong about what it means to be wrong."

A former editor of the online environmental magazine Grist and a 2004 Pew Fellow in international journalism, Schulz credits Brown with fostering her intellectual wariness and political passion. In college, she says, she learned to question received wisdom, to form her own opinions, and then to stand behind them wholeheartedly.

Her newfound convictions, however, sometimes slipped from the strong into the strident, she recalls with amusement. "I felt absolutely dead right with a black-and-whiteness of certainty, as though I, at eighteen years old, knew exactly what was going on."

Over time Schulz learned to direct her intellectual wariness toward her own sense of certitude. While covering a conservative film festival in Dallas at the height of election fever in the fall of 2004, she found herself among people who held starkly different opinions from her own.

"I lived in New York," she says. "I was a liberal. I graduated from an elite Ivy League university. And to make matters worse, I was a representative of the New York Times." Suddenly she was struck by the thought that to this group she was the enemy. "I think I live a good, ethical, principled life. I try to be a good person. But short of being Hillary Clinton, I could not have been more unwelcome in that room."

Schulz admits that her first reaction was to try and convert the others. But then it struck her: "Can I budge? Am I capable of sincerely sitting down and listening to these folks? Are there any of my political opinions I feel like I can give any ground on?"

These are important questions for us all, Schulz believes. And college isn't too early to ask them. She suggests that at a school like Brown in particular, where the community is close and politics are passionate, students would do well to examine their assumptions about error and disagreement, particularly about people they consider wrong.

"Do you assume that they are ignorant, or idiotic, or completely morally bankrupt, or do you get curious and try to understand what is motivating that person?" Schulz wonders. "Do you ask, 'What do they see that I don't see?'"

Faculty as well would benefit from reexamining the importance they place on being right. Too often, academics conflate being right with being smart, she observes. "There is a tremendous pressure in the university to be correct and to come up with the New Brilliant Interpretation That Nobody Has Ever Thought of Before—and you stake your career on that."

The pressure to be right can lead to intellectual conformity, she believes, since what's right is often defined by tradition or by a particular university culture, department, or professor. This preoccupation with fitting in limits the ability of both students and professors to challenge old ways of thinking or to come up with new ones.

"Entertaining the notion that you're wrong as a background intellectual commitment allows you to step back from that nose-to-the-ground view of what you are doing and ask much bigger questions than you would otherwise ask," Schulz says. "And that I think is intellectually totally crucial. If you are comfortable with wrongness, there are a whole lot of different roads to explore, and all of them are productive."

Linda Heuman is a Providence-based writer.