On August 20, quarterback Kyle Rowley '01 led the Spokane Shock past the Tampa Bay Storm to take the Arena Football League championship in ArenaBowl XXIII, 69–57. Rowley passed for 237 yards and connected for a record nine touchdown passes in the game, which capped a 13–3 regular-season record for the Shock. At Brown, Rowley saw little playing time until his senior year, when he led the Bears to a 6–3 record. In other pro football news, special-teams star Sean Morey '99, suffering from post-concussion syndrome, retired after nine years in the NFL. Morey, a one-time Pro Bowler, was cochair of the NFL Players Association's concussion and traumatic brain injury committee. He won a Super Bowl ring playing for the Steelers in 2007. 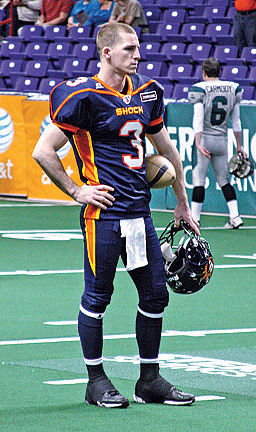