On May 29, anthropologist Stephen Houston was watching a Guatemalan worker chip away at a slab of stone when a piece of the rock gave way. When Houston peered into the hole that had been made, he saw pitch-blackness. He and his team then lowered a light and were dazzled. "We saw a riotous explosion of color," Houston says. 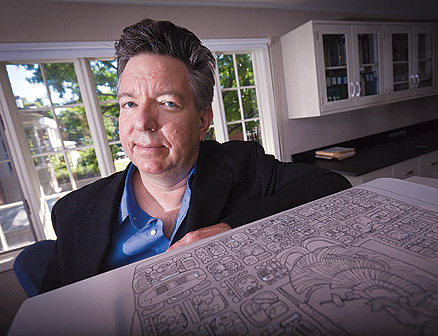 They had found a 1,600-year-old Mayan tomb that contained a trove of artifacts—blood-red bowls with human fingers and teeth, multi-colored textiles, pieces of jade, residues from food, and bright red vessels in almost perfect shape.

All had been sealed shut in what is almost certainly the burial ground of a Mayan king, likely one who'd begun a new dynasty. "Basically, we were looking at a bank vault in Mayan terms, where they placed some precious objects along with royal treasure," says Houston, who is the Dupee Family Professor of Social Science and the recipient of a MacArthur genius award. 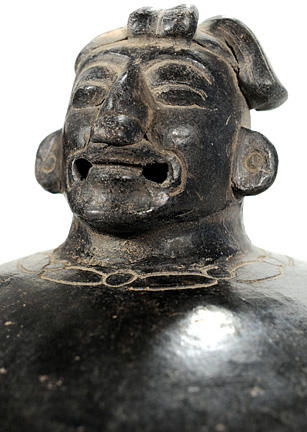 Houston began digging at the site, called El Zotz, last year, then returned again this spring with a team of Brown students and researchers. It is located in northern Guatemala about thirty miles from Tikal, a major Mayan city, though it's thought that the kingdoms of Tikal and El Zotz were enemies. El Zotz contains the ruins of a thirty-two-foot-high pyramid, ceremonial plazas, ball courts, and a palace. Houston and his crew found the royal tomb beneath a small temple located just in front of a sprawling structure dedicated to the sun god. 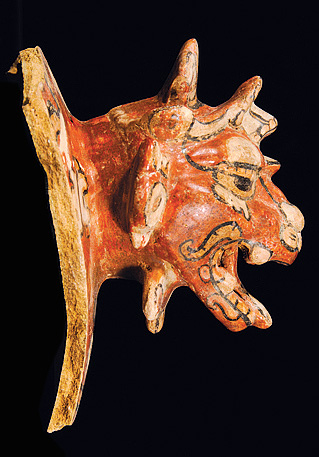 Arturo Godoy
The head of a mythic donkey.

It's well known that the Mayans practiced human sacrifice, and Houston said there were relics of six children in the tomb—four one-year-olds and two children a few years older. According to biological anthropologist Andrew Scherer, another Brown professor working at El Zotz, the Mayans included only the skulls of the older kids but the entire skeletons of the infants. There were also signs the babies had been either burned or cremated.

"This was a pretty gruesome activity," Houston says. The tomb smelled rank, a result of outside air hitting the entombed items for the first time in hundreds of years and causing putrefaction. A sacrificial blade stained with a red residue that is likely blood was also found near the king's hand. "The tomb just went on and on with these exotic and bizarre features."

Among the items were lids of pots painted with shrieking monkeys whose their tongues are hanging out; red ingots of the same size, which may have been used as a measurement system; and masks depicting different aspects of the sun god.

The site in Guatemala is now guarded around the clock to prevent looting. All the items in the tomb have been excavated, but Houston plans to return next year to continue digging. Houston says that he told one of the students who was with him, "This is probably the only time you will dig up something like this. They come along once in a generation."