Professor of physics Greg Landsberg may be about to revolutionize our understanding of the universe. 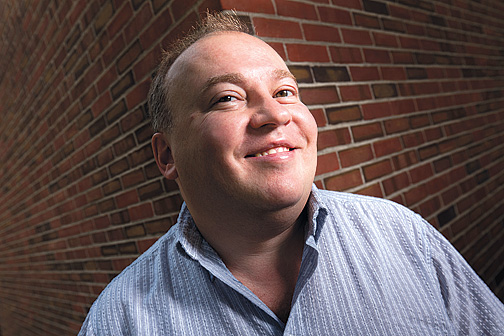 Scott Kingsley
Landsberg delights in probing the limits of our knowledge of the universe- especially when it turns out he is wrong.

Landsberg is one of the scientists using the Large Hadron Collider (LHC), the massive subatomic particle accelerator that opened recently at the CERN Laboratory near Geneva. The LHC is capable of running protons around its seven-mile track at speeds never before attained on earth, causing particles to collide with equally unprecedented force.

These collisions will allow Landsberg to test a theory he first propounded in 2001: that in addition to the three dimensions we know—length, height, and width—there are between two and seven more we can't see. The gravitational force of these extra dimensions, Landsberg says, can produce mini black holes in the LHC, giving scientists the clearest idea yet of what happened immediately after the Big Bang. It may forever change our conception of how the universe works.

Ever since the 1970s physicists have known that their mathematical models of the universe don't quite add up. They fail to reconcile quantum mechanics, which predicts how subatomic particles will behave, with Einstein's theory of relativity, which explains the behavior of much larger phenomena such as time, space, and gravity. "The standard model cannot be the ultimate description of the universe," Landsberg says.

Scientists have proposed various theories as a fuller explanation. Some physicists, for example, suggest that the universe is made up largely of subatomic particles we haven't yet discovered. Landsberg's theory is what his fellow physicists call an "exotic scenario." What's missing, he argues, are not particles, but undiscovered dimensions: "We already have a complete list of ingredients to model the universe," he says.

The idea of extra dimensions isn't new, but Landsberg believes these dimensions are much larger than previously estimated—a fraction of a millimeter in diameter, which in subatomic terms is huge. The simplest way to test the existence of these extra dimensions is to produce a collision of subatomic particles in the collider and observe whether any of the debris it produces suddenly disappears. That would suggest the particles have gone off to one of the undiscovered dimensions. By determining the number of particles that have disappeared, physicists could gauge how big these dimensions are.

What does all this have to do with black holes? Physicists agree that black holes in outer space are triggered when a star collapses in on itself. The massively compacted remnant star then begins to emit a gravitational pull so strong that it sucks in everything around it.

Suppose the gravitational pull in Landsberg's other dimensions is stronger than the one in the three dimensions we can easily observe. When subatomic particles crash together in the Hadron collider, they too will become massively compacted and generate a strong gravitational pull. Add in the gravity from the extra dimensions, and the pull may become so powerful that you wind up producing a miniature black hole. These black holes won't stay around for long—they will quickly burst apart into a unique pattern, evidence of a black hole.

Landsberg says that even if his theory doesn't pan out, the LHC offers the best hope yet that fundamental problems in physics may be resolved over the next several years. "To me," he says, "the most exciting outcome of the LHC would be the observation of something completely different that we never predicted, so mind-boggling that we will have to go back to the blackboard."