The stars are gone. Or are they? Under head coach Phil Estes the football team has long had a succession of great players, from Sean Morey '99 and James Perry '00 to Nick Hartigan '06 and Buddy Farnham '10. This spring no fewer than four graduating seniors were invited to join NFL teams. Can Estes keep this up?

"We have some names," Estes says, "that people will start to talk about when we start playing." Especially along the defensive line and at wide receiver, he explains, talented players have been waiting for their chance. 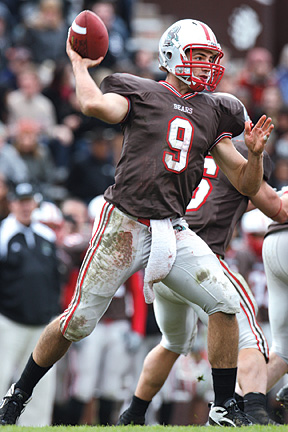 The quarterback position has always been a strength for the Bears under Estes. Last year, his first season, Kyle Newhall-Caballero '11 earned first-team All-Ivy honors by establishing himself as the premier passer in the Ivy League. He completed 259 of 413 passes for 2,709 yards and eighteen touchdowns. He was second in the country in completions, tenth in total offense, and twelfth in passing yards. Against Holy Cross in October, he set an Ivy League record for completions in a game, with forty-six.

"Kyle has a great sense of the game," Estes says. "He is very good in the pocket. When the pocket breaks down, he is able to escape and make some plays."

Joe Springer '11 is an experienced reserve, and has played regularly in junior varsity games. Patrick Donnelly '13 could be the quarterback of the future.

Playing behind All-Ivy wide receivers Farnham and Bobby Sewall '10, younger receivers haven't seen much playing time. Matt Sudfeld '11, who had nine receptions last year—one for a touchdown—is the most experienced receiver in the group.

"He is very elusive once he catches the football," Estes says. "He has very good hands and decent speed, and he can make plays."

At 6 feet 2 inches and 200 pounds, Jimmy Saros '12 should start as well, and Alex Tounkara '11, who is two inches taller and five pounds heavier than Saros, should provide another big target. Nate Lovett '12 was a second-team All-Ivy punter in 2009, and at 6 feet 4 inches and 210 pounds, he should see some playing time at wide receiver.

Alex Prestley '11, a 6-foot-6-inch, 250-pound tight end who hauled in fourteen passes for 116 yards last season, starts at one end, while Nicholas Faber '12, who is more of a blocking tight end, and Alex Harris '13 should back up Prestley.

The Bears managed more than 1,200 yards on the ground last year. Second-team All-Ivy tailback Zach Tronti '11 accounted for 564 of them in eight games before suffering a season-ending injury against Yale. "He was one of the top backs in the league before he got hurt," Estes says. Now that he is fully recovered, he should once again be the featured back.

Unfortunately, Tronti's replacement last year, Spiro Theodhosi '12, is out for the season after a spring injury, so expect Mark Kachmer '13 to step up, with Jordan Morrison '13, a physical downhill runner, and Jeffrey Izon '13, a scat back with big-play capabilities, also vying for playing time.

Jackson Freeman '13, at 240 pounds, is the likely starting fullback.

Last year's offensive line helped the Bears lead the Ivy League in total offense and passing offense. Despite losing three All-Ivy players, Estes believes he has another strong group up front in tri-captain Patrick Conroy '11, the left tackle and anchor of the line; Brian Ellixson '11 at right guard; and right tackle John Cook '11. Newcomers include Jack Geiger '12 at center and left guards Evan Johnson '12 and Luke Landers '12, who both should see significant playing time. 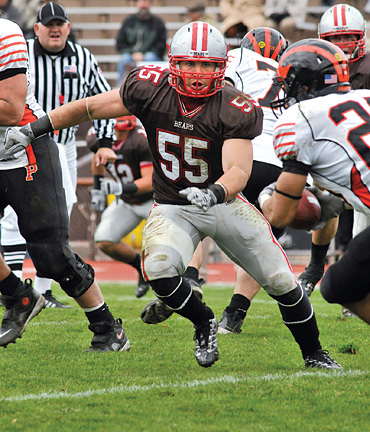 Despite losing all four starters along the defensive line, including NFL hopefuls James Develin '10 and David Howard '10, a number of younger players are poised to step in.

After missing last season, Clay McGrath '11 starts at defensive end, while the tackle slots are likely to be filled by John Anderson '11 and Kyle Rettig '12, who had ten stops last season. Patxi Colbern '13 will likely start at the other end, but Jeremy Raducha '11 will probably get significant playing time. Luke Miller '12, Jeff Matteis '12, and Landon Turley '12 will all fight for playing time at defensive end, while Stephen Fox '13, Ross Walthall '13, and Will Rulifson '11 will be in the rotation at defensive tackle.

Estes is fortunate to have four experienced linebackers: tri-captain Andrew Serrano '11, who made thirty-two stops last season, will be on the inside along with Chimso Okoji '11, who was Brown's defensive MVP in the spring.

Robert Gillett '11, who had thirty-one tackles, including four for a loss, will return as strong outside linebacker, while Phil Roffi '11, with twenty tackles last season, will fill the other outside spot.

In the secondary, Brown returns one of the premier up-and-coming players in the league, second team All-Ivy cornerback AJ Cruz '13. Cruz burst onto the scene as a freshman last year and made an immediate impact, with fifty-seven tackles and three interceptions. Russell Leedy '11, who had one interception last season, will start at the other corner.

Steve Peyton '11, made six tackles and recovered a fumble in 2009, will likely take over at free safety.

The emergence of second-team All-Ivy punter Nate Lovett '12 last year provides stability and confidence on special teams. "I think we could be a different kind of football team this year," Estes says, "because I think our kicking game is going to improve."

Lovett averaged 39.9 yards per punt for the Bears, who ranked third in the Ivy League, and his seventy-three-yard boot against Penn stands as the seventh-longest punt in Brown football history. Lovett will also handle the kick-off duties. Nate Meyer '13 will take over the field goal and point-after role, but also has the ability to step in on kick-offs or punts if needed.

AJ Cruz will likely take over for Farnham and Sewall as a kick returner.

"This is a team that is looking for respect," said Estes. "Most of what has been said about this team is about what we lost and not about who is here. They have a chip on their shoulder and they have something to prove."

The September 25 Brown-Harvard game this year will also be the first-ever night game at Brown Stadium, which should add a new layer of excitement to this Ivy rivalry.

Estes is confident in his team. "We'll contend," he says. "We have a chance to win it all. We have to stay healthy and we have to go out there and execute and not turn the ball over."