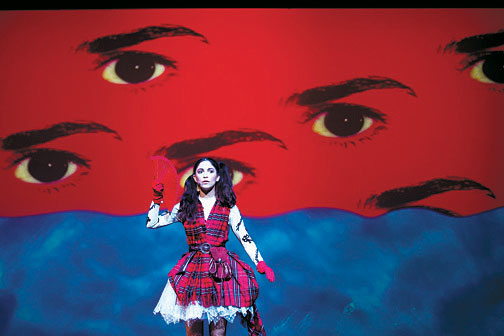 Photos courtesy Playground Theatre
The avante-garde meets children's tale in Ansen's production of Alice's Adventures in Wonderland.
But what is really unusual about Ansin is that she directs plays for children.

Ansin is the artistic director of Miami's PlayGround Theatre, a performance arts space like no other in the United States. She uses music, dance, puppets, masks, and elaborate costumes to produce plays that are a far cry from standard children's fare. For a production of Inanna and the Huluppu Tree, which was inspired by 4,000-year-old Sumerian folktales in the epic Gilgamesh, she used a flying mythological bird, a smoke machine, and aerial choreography to tell the story of a young goddess who saves a city beset by storms and angry deities.

Sometimes Ansin finds inspiration closer to the present, as she did while directing a kid-friendly version of Gabriel García Márquez's A Very Old Man with Enormous Wings. It was adapted by Pulitzer Prize winner Nilo Cruz '94 MFA ."I refuse to dumb it down for the kids," says Ansin. She likens her job to a pediatrician's—"the medicine they practice isn't any less sophisticated or detailed or important than medicine for adults." 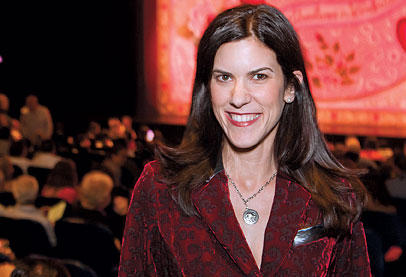 Stephanie Ansin refuses to dumb plays down for kids.

Ansin first got the theater bug at a performing arts camp she attended in Massachusetts as a teenager. At Brown she studied non-Western theater traditions, and several years after graduating she spent a month in Bali studying mask dancing. She came up with the idea for the PlayGround while she was earning her MFA in directing at Columbia. As an exercise, the teacher asked the students to create a business plan for a new theater. Ansin and a fellow student came up with the idea for a children's venue that exposed kids to the world of theater well beyond the confines of Disney's Broadway offerings. "Everyone said, 'You should do this idea,'" Ansin says.

Ansin and her then-husband, the Russian director Oleg Kheyfets, decided to locate the theater in Miami, where Ansin had grown up. Her father is a real estate developer and investor and the owner of a Miami TV station. Her mother, Toby Lerner Ansin, founded the Miami City Ballet. As a result, Ansin had access to a network of wealthy donors.

"It was easier than starting anywhere else," she says. For a theater, she and Kheyfets picked a rundown 1940s movie house in Miami Shores. They then negotiated a seventy-year lease for a total of $200,000 and restored the theater's terrazzo floors, art deco light fixtures, and even the original signs for the men's and ladies' bathrooms. The theater has 330 seats. "It's beautiful and very charming," Ansin says.

She wanted to raise enough money to allow the majority of kids to attend for free. Today, PlayGround is a $2.7 million venture, and 80 percent of the children who come pay no admission.

"I look for plays with a message that we can communicate in an inspiring way without being dogmatic," she says. "I look for an opportunity to bring in sumptuous visuals, music, and movement." Ansin says she runs her selections by her daughter, who is now seven. "She gives me choreography ideas," Ansin says. "I don't always implement them, but they get me thinking in a new way."

This April, Ansin produced The Red Thread, an adaptation of several Chinese folktales and myths, which she cowrote with her frequent collaborator, Fernando Calzadilla. "One child walked in before the show started, saw the stage, and said, 'Look, it's 3-D TV,'" she recalls. In the long run, Ansin says, she hopes PlayGround will inspire a new generation of theater artists. "We're creating awe and wonder," she says, "and it's right there in the room with the kids."

Reader Responses to Beyond Disney