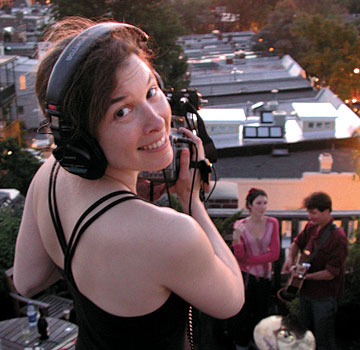 In the early 1990s a Pfizer-sponsored study in the Journal of the American Medical Association reported that 43 percent of U.S. women say they have experienced such difficulties as painful intercourse, sexual anxiety, or inability to reach orgasm. The media was quick to report that 43 percent of women suffered from "sexual dysfunction," and Oprah Winfrey announced a "secret epidemic." The FDA acknowledged the existence of something called Female Sexual Dysfunction, and the race for a female Viagra was on.

While Canner was editing films for Vivus to use testing its ED drug, the company gave her access to create her own documentary about women and pleasure. The result is Orgasm, Inc., a hilarious (and very disturbing) documentary about multinational pharmaceutical companies and American sexual mores. Canner says she never intended to produce an exposé. But over the nine years she worked on the film, she became increasingly alarmed at the number of pharmaceutical companies jumping at the chance to make big profits off female sexual complaints that may have no physical basis.

Canner also includes interviews with patients, researchers, and even an expert on women's pornography. One of the patients Canner interviews is a woman so distraught over her sexual "sickness" that she volunteers to help test a device called the Orgasmatron, which enables a woman to stimulate herself by sending impulses down a wire inserted into her spinal column. The patient soon returns to the doctor crestfallen and complaining that the Orgasmatron produced no orgasm. When he asks her to demonstrate, she activates the device and one of her legs flies up in the air and shakes.

After the device is removed, the patient, resigned to her failure, reveals the nature of her "illness" to Canner: it's not that she never achieves orgasm, she just can't do it vaginally. If she's sick, Canner points out, then so are 70 percent of American women, according to the 2004 Hite Report.

As an undergraduate at Brown, Canner studied anthropology and visual arts. In her modern culture and media classes, she learned Foucault's dictum that there is no normal. That truth hit home as she filmed the pharmaceutical industry's sometimes absurd attempts to create norms for women's sexual experience.

Canner believes the drug companies are trying to create a market—at the risk of women's health. None of the sex drugs for women has performed better than a placebo. What's more, they could be dangerous. Unlike Cialis or Viagra, which can be taken on an as-needed basis, the drugs being developed for women are patches and pills that continuously flood women's bodies with medication. Given all that, it comes as a huge relief in Orgasm, Inc., when the members of an FDA panel unanimously vote to withhold approval for Vivus's little pink pill.