The Day That Changed Everything

Six Brown alumni lost their lives on September 11, 2001, and eleven lost members of their immediate families as a result of the attacks. At least one alum was killed at each of the attack sites. Raymond J. Rocha ’95, Joanne E. Weil ’84, and Paul Sloan ’97 were at work in the World Trade Center when a pair of jets slammed into the Twin Towers. Sloan had called home to reassure family that he was safe because he was not in the first tower hit. Then the second plane struck. 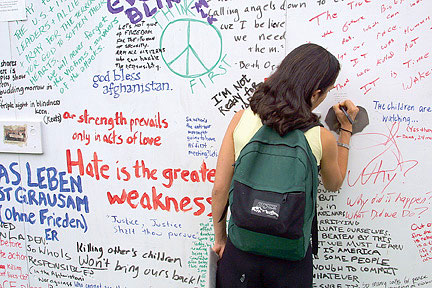 John Abromowski
A student writes a message on the memorial wall erected on the main Green in the week after the attacks.
David W. Laychak ’83 was in his office on the first floor of the Pentagon when a plane exploded into it. Donald F. Green ’71, a skilled pilot, was on Pan Am flight 93, which crashed in Pennsylvania; his family believes that, had the passengers succeeded in overpowering the hijackers that day, he would have been able to fly the airliner to safety. And Charles J. Margiotta ’79, a lieutenant with the New York City Fire Department, was among the first responders buried in the collapse of the towers. Read their stories here . Read a Huffington Post profile of Margiotta here .

Alumni were also among the rescuers. In addition to Margiotta, who was one of the 343 New York City firefighters who died that day, Dan Hanfling ’92 MD took his Virginia-based Federal Emergency Management Agency into the scorched, collapsed cavity the attackers had carved into the Pentagon. Dan Avstreih ’98, ’02 MD spent two weeks at Ground Zero with a Rhode Island Disaster Medical Assistance Team that included more than a dozen Brown faculty, staff, medical students, and alumni.

The events of that day left the rest of us staring in dismay and horror at our computer screens, television sets, and radios. Ten years ago, the BAM told the story of that day and its immediate aftermath through the eyes of alumni who ran free of the towers or responded by trying to rescue whomever they could. We described the response by faculty, staff, and worried students on campus. We told the stories of the alumni who died.

On September 11, 2001, some of us wondered about the safety of relatives in New York City. No Brown students lost family members that day, but Chris Senio ’04, overslept and woke up to the news that One World Trade Center, the office building where his father, Ron Senio ’66, worked, had been attacked. In a pair of BAM essays, the two described how they tried to find each other. On that day an entire generation that had never known violence on a mass scale was changed forever.

I worried about my brother-in law, whose office was in the complex. He’d been there for the 1993 bombing, and it frightened me to weigh the odds of someone escaping two terrorist attacks. I phoned my sister to see if she’d heard from him. He’d been told to sit tight, she said, however he was leaving. Later he called on his cell phone to say he was safe on a ferry to New Jersey—but the image of men and women leaping to their death will always be seared in his memory. His building was destroyed. The paperwork on his desk, the photos of their kids, are gone.

The students in this year’s incoming class, the class of 2015, were just eight years old at the time of the attacks. Soon Brown students will learn about September 11, 2001, as an event in U.S. history. My own daughter, who is thirteen years old, has no clear memory of that day. So after attending her orientation at middle school this year, I was surprised to hear her ask what I had been doing the morning of 9/11.

“It’s for school,” she said. “We have to interview three people about what they remember from that day.” Interestingly, the assignment is part of a curriculum called Choices, which was designed at Brown’s Watson Institute for International Studies to help teachers integrate historically relevant topics into their curricula.

As my daughter quizzed me about that day, I was grateful for the opportunity to recall that postcard-perfect morning: the air was crisp, the sun warm, and the sky a cloudless, crystalline blue. Watching the second plane hit the tower on television, I remember numbness giving way to slow realization that something was seriously wrong, that this was no accident but an attack, that these planes and the innocent people sitting in them were being used as bombs. The safety net that we believe protected all of us turned out to have a gaping hole.

We all know how that day unfolded: the Twin Towers fell, taking with them 2,753 lives. Another forty victims died in a field in Shanksville, Pennsylvania, while 184 people were killed at the Pentagon. Ten years ago, before there was a War on Terror, the idea of an enemy without home, an enemy hidden in caves and sleeper cells, would have seemed bizarre. Not so today. We are all fluent in the language of terrorism now. Our illusion of safety has been shattered. At airports we willingly slip off our shoes and hand TSA agents our toiletries in quart-size plastic bags. While waiting for planes, we keep an eye out for unaccompanied bags and shady characters. Our vocabulary has expanded to include words such as drone strikes and waterboarding, and we speculate what will happen now that both Saddam Hussein and Osama bin Laden are dead. Are we winning the War on Terror?

My daughter inherits a world far less certain than the one I inhabited at her age. For her middle-school project, I told her about my memories of September 11, 2001. What I didn’t tell her was how wistful those memories made me. We all lost our innocence that crystalline morning, and I wish I could bring it back—for her, at least.

What do you remember from 9/11? Tell us what you were doing, how you felt, and how your own lives have been changed. Leave your comments in the space below.

Reader Responses to The Day That Changed Everything