September 15, 2011—In an unexpected announcement, President Ruth J. Simmons announced this morning that she will step down as Brown's chief executive at the end of this academic year. She will, however, continue at Brown as a professor of comparative literature and African studies. 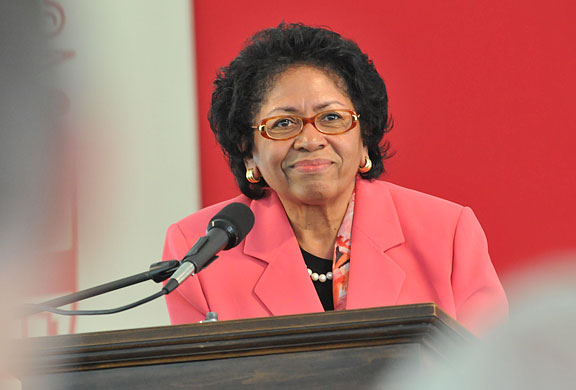 Frank Mullin/Brown University
President Simmons answers questions at the Alumni Hour with the President at Commencement and Reunion Weekend 2011.

In a letter thanking the Brown community for "eleven deeply satisfying years at the helm of this wonderful institution," Simmons revealed that she had originally intended to conclude her presidency after ten years but was persuaded by Corporation officers to stay on. "However," she wrote, "after much thought, I recently decided that this is the ideal time both for Brown and for me personally to begin the process of transitioning to new leadership."

Simmons, who became Brown's eighteenth president on July 3, 2001, ends one of the most dynamic presidencies in Brown's history. Born in a sharecropper shack on a Grapeland, Texas, cotton farm, Simmons, the youngest of twelve children, attended Dillard University on financial aid and eventually earned a PhD in Romance languages from Harvard. Simmons made it clear early in her presidency that giving poor and lower-middle-class high schoolers the same opportunity that financial aid gave her would be a top priority for her administration. Three years later, thanks largely to the unlikely friendship that evolved between Simmons and liquor billionaire Sidney Frank ’42—a friendship that resulted in a $100 million gift from Frank—Simmons admitted Brown's first need-blind class, declaring that an applicant's financial status would no longer have any bearing on his or her admission to the University.

"I began life in circumstances that argued against the possibility that I could ever attend college," Simmons wrote to the Brown community in today's letter. "That financial aid enabled my desire not only to get a college education but also to devote my life to extending that same opportunity to others has been a benefaction of incomparable personal meaning."

Simmons took over an institution still shaken from the sudden resignation of President Gordon Gee, and in essence told Brown to start acting like the world-class university it aspires to be. She crafted an ambitious academic plan, known as the Plan for Academic Enrichment, and raised a record $1.6 billion to pay for it, three times more money than any other Brown fund-raising campaign had ever raised.

Under Simmons' plan, research at Brown got an important boost when the graduate and medical schools expanded and received more support. The medical school opened a new headquarters near the teaching hospitals in downtown Providence, giving the school its first real home in its history. Simmons has also been responsible for the largest faculty expansion in recent history, hiring more than 100 new faculty members, about half of them permanent, tenured appointments. In addition, Simmons changed the look of campus by finding ways to increase lab and classroom capacity within Brown's existing physical footprints. Buildings such as Pembroke Hall, Rhode Island Hall, Metcalf Chemistry Lab, Faunce House, and J. Walter Wilson were gutted, renovated, and often repurposed, while new buildings such as the Parry and Marty Granoff Center for the Creative Arts and the Aquatics and Fitness Center were constructed.

Reader Responses to President Simmons Announces End to Her Presidency