It may have taken more than three decades, but the Warren Alpert Medical School now has a home. 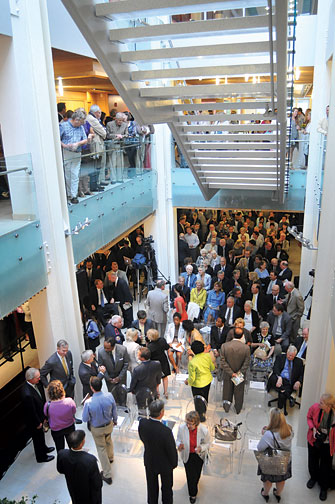 For the first time in Brown's history, the medical school on August 15 opened its own campus, a keystone building in Providence's jewelry district near the city's teaching hospitals. The location also places the school near a number of companies working on products in biotechnology and genomics, the nucleus of an attempt by the city and state to grow Providence's "knowledge economy."

"This gives [Brown medical students] an identity," Dean of Medicine and Biological Sciences Ed Wing said at the opening ceremony. "For thirty-seven years, they have not had a building they could call their own."

Rhode Island's entire U.S. Congressional delegation, as well as the state's governor and the city's mayor, spoke at the ribbon-cutting event at the renovated former headquarters of a costume jewelry manufacturer. Officials said they hoped the site of one Providence's formerly dominant industries will now be a pillar of a new economic foundation based on medicine and scientific research.

"In an otherwise all-too-difficult economic environment," President Ruth Simmons said, "this project makes plain what investments and partnerships are needed for the resurgence of this area of Providence."

"This building is a focal point of two extraordinarily important forces," U.S. Senator Jack Reed said. "One is the emerging biotechnology industry, which will be, I think, the future of this state." In addition, he added, "This school will produce the most important element of the future of the health-care system: the doctors."

Rhode Island's other U.S. Senator, Sheldon Whitehouse, echoed the sentiment. "We are on the cusp of extraordinary innovation in the way health care is delivered in this country." Health care, he said, cannot continue to burn up such a large percentage of the nation's gross domestic product. "It has to change. It must change, and I believe this institution will help drive that change."

The $45 million renovation of the 134,000-square-foot, four-story building features new lecture halls, seminar rooms, and anatomy labs, as well as an electronic library overseen by a full-time librarian. A favorite of medical students is likely to be the building's sixteen clinical simulation suites. These are essentially examination rooms in which medical students can interview and treat patients while being videotaped, allowing teachers to review their technique.

The building and all it represents, said U.S. Congressman Jim Langevin, "is really a great shot in the arm for our struggling state."

Reader Responses to Home at Last