Bruce Elliot Donovan, who died July 11, was a man of many gifts, and his career at Brown was multifaceted: an inspiring professor, an outstanding mentor, and a dedicated public servant, he was loved by colleagues and generations of students for his keen intellect, wit, irrepressible sense of fun, and massive humanity. 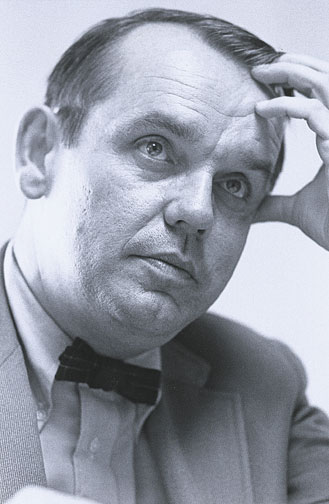 Courtesy the Donovan Family
As a dean, Bruce Donovan was known for his bowties and his compassion.
Educated at Andover, Brown, and Yale, Bruce was a Woodrow Wilson Fellow, a Fulbright Scholar, and a Fellow of the Center for Hellenic Studies. A specialist in Greek papyrology, he joined Brown's faculty in 1965 and moved from assistant to full professor in the classics department, which he chaired several times. President Howard Swearer appointed him associate dean of the College and dean for chemical dependency.

With his bowtie and penny loafers, Bruce was a campus icon. He often claimed that each student "owned a piece of the rock," meaning that each should feel entitled to a first-rate Brown education. Compassionate and patient, non-judgmental of human frailty, and dedicated to helping, he also understood how each individual might profit from his wisdom and experience, and adapted his strategies accordingly.

Bruce devoted extraordinary energy and invention to preventing substance abuse and promoting recovery. A pioneer in work on addiction, he became a leader nationally and internationally. He was particularly interested in the relationship between creativity and addiction and in helping addicts see that their talents were not dependent on the substances they abused.

Bruce's facility with language extended to elegant (sometimes Baroque) prose, and to rhymed doggerel that celebrated (and roasted) colleagues. His enthusiasm for spoken Latin led to a key role at Commencement, reading the Latin citations for honorary degrees. He tutored Brown presidents in Latin pronunciation, giving us the unique memory of Howard Swearer's Latin spoken with a Kansas twang.

Active in the Providence community, Bruce chaired the Lippett Hill Tutorial's board, and the nominating committee of the Northeast District for Phi Beta Kappa. After retiring in 2004, he turned his attention to end-of-life issues, serving on the Rhode Island board of the Funeral Service Alliance. He was tireless in visiting Hospice patients and nursing homes. He joined a singing group, which had been a lifelong dream, and became the MC for their gigs, introducing each song with a little history. He is survived by his wife, Doris '59, a son, a daughter, and four grandchildren.

Those of us who worked with Bruce will remember him as a brilliant, compassionate, funny, irreverent, and larger-than-life figure. For us he personified the best of Brown.

A memorial celebration will be held September 22, at 4 p.m. in Sayles Hall.

Reader Responses to Humanity and Humor