As darkness fell on Tuesday, September 11, 2001, Paul Myoda and his friend Julian LaVerdiere walked the streets of Brooklyn together, reflecting on the day's horrific events. While gazing at lower Manhattan's overwhelming clouds of ash and smoke eerily illuminated by the floodlights of rescue workers, Myoda, an assistant professor of visual arts, saw an image presenting itself. "We saw the buildings," he says. "They were still present. To us, they felt like phantom limbs." 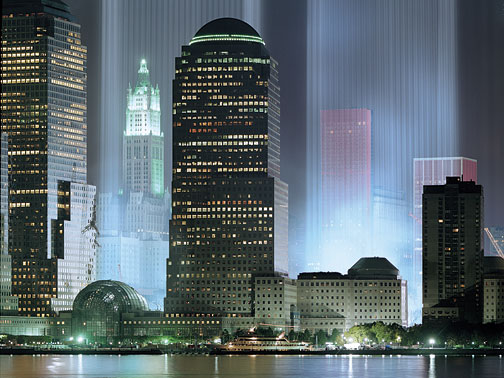 Digital illustrations by Paul Myoda and Julian LaVerdiere
Visual art professor Paul Myoda is one of the designers of the Tribute in Light memorial.
Within hours, the two turned that vision into what is now one of the best-recognized public art displays in the world—the image of two bright columns soaring beyond the Manhattan skyline, originally called The Phantom Towers.

In the years and months leading up to September 11, 2001, Myoda and LaVerdiere had been collaborating on a project called The Bioluminescent Beacon, a response to the pending completion of the human genome mapping and the new millennium. The work was a light beacon fueled by bioluminescent plankton atop New York City's highest skyscraper at the time: the World Trade Center.

With lab space in the American Museum of Natural History and an art studio on the ninety-first floor of One World Trade Center, the project was well under way. Then came 9/11.

The day after the attacks, editors at the New York Times Magazine asked Myoda, LaVerdiere and other artists to create a response to the attacks. Having photographed the dust cloud the night before, they had the idea to "resculpt the cloud into the towers." The image ran on the cover of the September 23, 2001, magazine.

"The New York Times was taken aback by the strength and eeriness of that image," Myoda says, "and it was amazing how much response we had."

Six months later, at nightfall on March 11, 2002, the team illuminated eighty-eight 7,000-watt xenon floodlights (forty-four for each tower) in a parking lot a block away from Ground Zero. Twin beams of light shot powerfully up into the sky. The installation, which Myoda and LaVerdiere created with the support of the nonprofit organization Creative Time, was called Tribute in Light. It lit up the sky every evening for the next month, and since 2003 it has been repeated on each anniversary of the attacks.

"It was very difficult to realize the project that first year—the politics, the logistics, the budget. And when it was finally done, I was relieved and happy for a moment," he said. "But those feelings were immediately eclipsed by all of the memories of that day, the reasons why the project even exists. There's so much pain associated with it."

But one comment in particular made it all worthwhile. "I'll always remember," Myoda says, "what a rescue worker told us when we were working onsite. He said, 'We have been looking down at this hole, this pit, for so long, and for the first time, people are looking up again.' I thought this was the most fitting metaphor." Tribute in Light is now under consideration to become a permanent addition to the World Trade Center memorial.