How Real is Love, Really?

Jeffrey Eugenides won the Pulitzer Prize for fiction and a boost from Oprah's Book Club for his novel Middlesex, which sold 3 million copies. His new novel is a love story set at Brown in 1983—at a time when students were reading books by Derrida, Foucault, and Barthes. Eugenides teaches writing at Princeton. 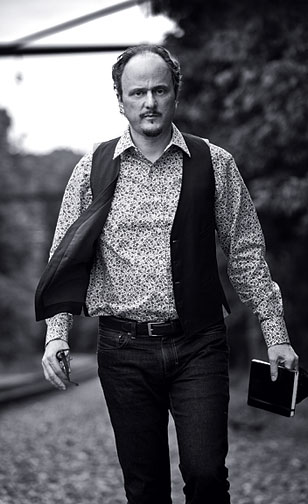 Ricardo Barros
Novelist Jeffrey Eugenides has taken the oldest story in the world, made it new, and set it at Brown.

BAM In The Marriage Plot, you have a pitch-perfect description of a semiotics class at Brown, with students in black jeans and T-shirts with the sleeves and necks cut off. Was that your crowd?

Eugenides No, I was in the artsy group. When I first got to college, I was dressing sort of like Oscar Wilde. I was going to the vintage and used clothing stores on Thayer Street and buying suits from the 1940s. I thought I was flamboyant, but I was actually just ridiculous.

BAM What was your concentration?

Eugenides British and American literature. I did the honors program because it was more rigorous and more scholastic, requiring all these books from the sixteenth and seventeenth centuries—things I knew I'd never read unless someone required me to. I took a lot of writing and religious studies courses. A lot of art classes. I didn't take enough sciences. I got a little too humanities-centric.

BAM In the novel, the character Madeleine Hanna writes her thesis on the marriage plot in literature. What was the focus of your thesis?

Eugenides I did a creative thesis, a collection of short stories.

BAM Who was your adviser?

Eugenides John Hawkes. I came to Brown because John Hawkes was on the faculty. A teacher in my high school had gone to Brown and had all his books on the shelf, and I used to go in there and read them and be intoxicated and mystified.

BAM How do you describe The Marriage Plot to people?

BAM In a 2004 Slate essay you described marriage as the greatest subject the novel ever had, and you lamented its death. Then you wrote a book about a marriage. Why?

Eugenides I was lamenting the death of that subject for a novelist, and of course when you lament the death of something you're also calculating how you could bring it back [laughs]. To be honest, I was mainly writing about a young woman at Brown studying semiotics, and how her love troubles began when she was deconstructing the notion of love in her semiotics class. That's where the book began.

BAM How does a novel like this come together for you?

Eugenides I knew that the book might have to do with marriage or the marriage plot. I didn't—and I don't usually—come up with an idea for a novel and then try to find the characters that would inhabit or express or embody that idea. I usually start with characters or a situation, and then some of my more intellectual ideas might or might not find their way into the book.

BAM So how do you write about love and marriage in an age of divorce?

Eugenides It's true that women do not get imprisoned by marriage as they used to in a Henry James or George Eliot novel, and one wrong choice on the part of a young woman does not necessarily doom her anymore, and the institution of marriage does not have the same strength it did. Even though these plots cannot necessarily happen today, we grew up reading these novels and watching the movies they gave rise to, and we have a lot of romantic idealism that the marriage plot gave life to. It's going to affect a lot of your decisions. This is a book about people reading about love, and the effects of reading about love.

BAM In the book, Madeleine reads Roland Barthes's The Lover's Discourse, and it changes her life. Do you think semiotics changed many students' lives?

Eugenides Semiotics in a way was one example of a moral relativism or a relativism that was coming into American culture quite strongly in the time. It had many different forms. But if you were a writer or wanted to be a writer you were attracted to semiotics for the rigor of the analysis and the sophistication of a lot of the arguments.

BAM Did it seem rebellious?

Eugenides The fact that it was European seemed attractive, and some of the arguments undermined a kind of complacent morality that you might have arrived at college with. That's usually a good thing; college should destabilize your assumptions and make you rethink them. I think semiotics did that.

BAM Did semiotics shape you as a writer?

Eugenides What Madeleine goes through in terms of romance—questioning whether love is a kind of social construction—I had to contend with as a writer. I had to decide if writing a narrative and writing fiction that might be readable and not entirely experimental, whether that is a throwback or a kind of illusion. I was working her romantic problems out while I was working my own literary problems out.

BAM Did the success of Middlesex make it any harder or easier to write this book?

Eugenides It always seems hard. My books don't usually resemble one another, so I don't have a lot to fall back on in terms of methodology. I'm always at sea, which is pleasurable, but also nervous-making.

Reader Responses to How Real is Love, Really?