I've Been Here Before

Channa Srey recounts a parable that a friend at Brown told him over a late-night meal at Josiah's: A man, stuck in a well, cries to another man, who is walking past: "Hey, can you throw me a rope?" The second man then jumps into the well. "Now we are both stuck," the first man says. "Don't worry," says the other. "I've been here before, and I know how to get out." 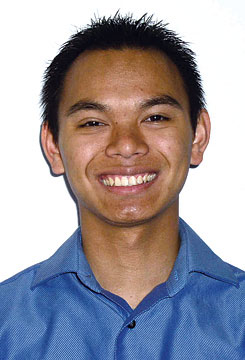 Srey says this story explains why, after escaping from a Cambodian refugee camp, pulling himself up out of poverty, and earning a Brown degree, he has now returned to the city where he grew up, Lynn, Massachusetts, to work with a local agency that helps low-income teenagers get into college. He's right back in the morass he struggled to leave as an adolescent, but this time he knows how to get out.

"I'm completely real," he says. "No one can tell the students, 'We are feeding you a pipe dream and ambitious goals that you probably cannot attain.' If they choose to go to college, there is a college out there for them. I know. I've been where they are."

Srey was born in the Khao-I-Dang Holding Center, a refugee camp on the border of Thailand and Cambodia. In 1986, his family moved to a housing project in Lynn, where they survived on food stamps and welfare checks until Srey's father found work as a dishwasher. Lynn, a once thriving manufacturing town plagued by poverty, gangs, and drugs, was a bleak place to grow up, Srey says. To illustrate, he quotes the town's unofficial slogan: "Lynn, Lynn the City of Sin. You never go out the same way you came in."

In 1998, the summer before his senior year of high school, Srey met a fellow Cambodian refugee, PoSan Ung '95, who offered to take him on a tour of the Brown campus. Srey had never heard of the Ivy League, let alone Brown. But, as he walked across the College Green, Srey says he felt a new awareness: "I was exposed to a world of opportunity and privilege. Brown, to me, was a place where the best and brightest came to pursue their dreams."

On campus, Srey concentrated in business economics while volunteering to work with local middle school students through the Southeast Asian Mentoring Program. After graduating, he jumped onto a management track at Hertz, the rental car company, in Salem, Massachusetts, and then worked as a fund accountant at Investors Bank and Trust in Boston. But, despite his success, he says, he got little satisfaction from his work.

In 2007, Srey began working at Lynn Classical High School as an adviser for Educational Talent Search (ETS), a federally funded grant program that helps kids in Lynn become the first members of their families to attend college. Srey estimates that he has personally helped more than 600 low-income, first-generation students go on to higher education.

"Teenagers get excited one day, and then they get overwhelmed by the hardship of growing up here," he says. "My job is to help keep them excited."

Reader Responses to I've Been Here Before