There are lots of knotty mysteries floating around the Brown campus: How does the brain work? What lies at the end of the universe? Can computers think? Who will succeed Ruth Simmons? 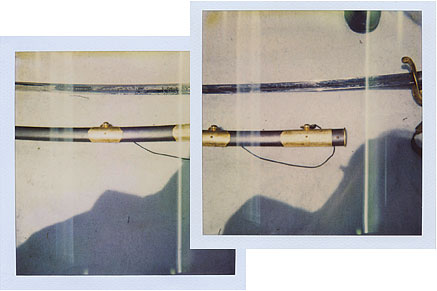 Brown Archives
The sword and scabbard disappeared from Brown in the late 1970s. Now the University thinks it has found where they wound up.
But the oddest mystery now being pondered may be: whatever happened to the Hawkins sword?

Up until the mid-1970s, the priceless Tiffany-designed sword was housed in the Annmary Brown Memorial, a windowless one-story granite building with bronze doors that stands just up the block from health services on Brown Street. Facing budget constraints, the University shut down the Memorial in 1975. When it reopened, two ceremonial swords and a scabbard were missing and presumed stolen. But no one knew by whom.

About a year ago, though, Brown got a tip from a Civil War buff that one of the swords and its scabbard had surfaced at a museum in Newport News, Virginia. Brown's lawyers demanded the return of the items and eventually filed suit against the city of Newport News, which owns the museum. When they learned that the sword and scabbard were on loan from Civil War collectors Donald and Toni Tharpe, Brown's lawyers added them to the list of defendants as well.

"Brown University is the titleholder to the Sword and ornamental scabbard," Brown said in court documents filed in the US District Court for the Eastern District of Virginia. Brown "is entitled to immediate possession of these invaluable artifacts." Lawyers for the different sides have been fighting ever since.

The sword was a gift to Brown from Civil War general Rush Hawkins, who received the weapon at an 1863 New York City ceremony recognizing his service to the North. Depictions of two soldiers in Hawkins's Civil War platoon—the so-called "Hawkins' Zouaves," known for the light infantry tactics they used against the South—are engraved on either side of the sword's grip. The ornamental scabbard bears the face of Medusa on one side and a coil of snakes on the other.

In 1907, after his wife died, Hawkins built the Memorial, filling it with the antique European manuscripts, paintings, and other bric-a-brac the couple had collected over the years. Hawkins and his wife, the granddaughter of Nicholas Brown, after whom the University is named, are both buried in the building. In the 1940s, Brown took over the Memorial from the independent nonprofit that had been running it.

"Brown's claim is based on conclusory allegations supported by circumstantial facts," lawyers for the Tharpes wrote in a motion to dismiss the case. The motion was denied.

The judge in the case has issued a temporary restraining order barring the Tharpes from selling the sword and scabbard. The weapons are being housed in a New York antiques warehouse until the case is resolved. A trial is set to begin in January. "We have the [sword's case] and the presentation materials," says James M. Green '82, Brown's deputy counsel. "The only thing that's missing is the sword."