"Did you get your tickets?" students whispered feverishly November 15. Tickets that the Brown Lecture Board had distributed free earlier in the week were on sale on Facebook. By three in the afternoon, students were lining up on the College Green, braving cold Providence rain to score a choice seat for a Q&A with TV and movie actor John Krasinski '01. 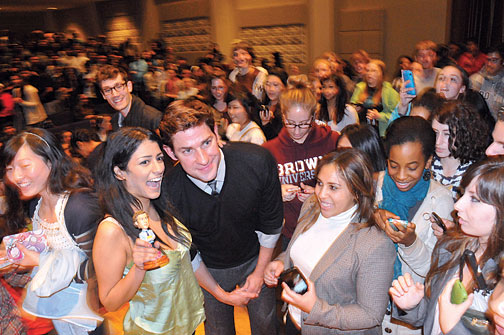 Frank Mullin
Fans mobbed John Krasinski after his talk, and one student presented him with a disarmingly realistic bobble-head doll.
When the doors opened at six, students flooded the De Ciccio Auditorium, which soon hummed with excitement and noise as they clapped to the songs playing over the loudspeakers. A burst of applause greeted the arrival of President Simmons and Krasinski's wife, fellow actor Emily Blunt. Then the music stopped and the auditorium went silent. When Krasinski finally walked on stage, the crowd erupted.

An English concentrator at Brown, Krasinski rose to fame in 2005 as the character Jim Halpert in NBC's hit sitcom The Office, a role he still plays. In recent years he has also starred with Maya Rudolph in the 2009 Sam Mendes comedy Away We Go, and has both acted in and directed a screen adaptation of David Foster Wallace's Brief Interviews with Hideous Men.

After Krasinski took the stage with a shrug that evoked the good-natured, low-key Halpert, he amiably answered each and every question thrown his way. Students didn't hold back. Several young women stood up and apologized to Blunt before professing their ardent love for their fellow Brunonian. With smiles and slightly embarrassed shrugs, Krasinski thanked his fans and candidly answered their questions about his time at Brown and his years toiling as a "professional waiter" in New York City while waiting to catch a break. He described a student play for which he needed to wear high heels—"real hard on the calves and shins," he said.

Krasinski admitted he was terrified while shooting The Office's pilot, and told the crowd that his TV boss, Steve Carell, could "kill you with laughter." Encouraging aspiring actors to follow their dreams and take advantage of Brown's nurturing environment, Krasinski also urged them not to fear failure. "Failing," he said, "is the thing you need more than success."

Students were clearly thrilled to hear not only from a veritable superstar but from one who, like them, ate meals in the Ratty—he said a lot of his entrees consisted of "just Tater Tots." Here was a man who not only has married a beautiful actress but also was a member of the Out of Bounds comedy group at Brown.

And although Krasinski offered sincere and heartfelt advice—telling students, for example, that, while there are "moments every week when you want to give up on something," there is also an imperative to "be courageous"—his love for Brown also came through in a conversation that seemed as informal and familiar as a homecoming.

"Have you seen the pug singing Batman on the Internet?" Krasinski asked his fellow Brunonians. "Go home and watch that."

Reader Responses to After Tater Tots