If you walked across the College Green on one of those days when mild weather draws students outdoors, you'd likely see young men and women tossing a Frisbee or passing a football or just sitting under trees staring at laptop screens or even reading books. If you're lucky, you might also see Melissa Bowe '11 balancing her way across a thick rope strung between two elms. Before dismissing this as yet another Brown student eccentricity, you should know that Bowe is an international champion in the new and burgeoning sport of slacklining. 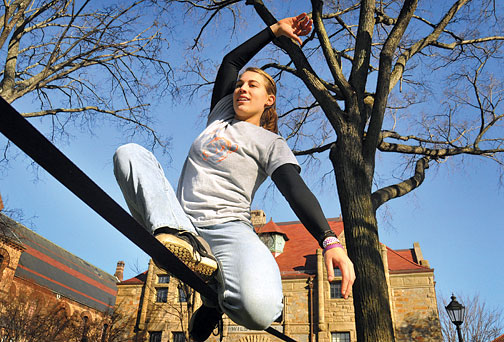 Slacklining combines the artistry of gymnastics with the informal street culture of the X Games. Slacklines are typically one- or two-inch nylon webbing strung between two anchor points. Unlike tightropes, slacklines are, well, slack, which allows for bouncing, stretching, and tricks.

In November, Bowe won the women's division at the Gibbon Games East International Slacklining Competition in Boston, defeating world champion Elli Schulte. She followed that up by winning an online competition in which competitors post weekly videos of themselves doing progressively more difficult tricks. For this, Bowe has been crowned the Queen of Slackline.

In competition, each person is given two minutes and goes head to head against the other competitors. The goal is to perform the toughest tricks without falling off the line. Because the sport is so new and there are not yet established criteria, judging can be somewhat subjective. "Slacklining is still such a young sport that all the tricks haven't been done yet," said Bowe. "People are always doing new tricks."

Her most impressive trick is the front flip, but she also performs some impressive combination moves, thanks to her balance, core strength, and athleticism. Bowe explains that there are two basic types of tricks: dynamic (or bouncing) tricks, and static tricks, in which the goal is to hold a position. Bowe's success may be due in part to her impressive and varied athletic background. She was on the varsity gymnastics team for two seasons, played club lacrosse for a year and a half, and was on the women's Ultimate Frisbee team for a semester.

Not surprisingly, credit for making slacklining a competitive event goes to two rock climbers who in the early 1980s began stringing loose cables and chains on the fringes of parking lots as a way of warming up for climbs in California's Yosemite Valley. Other climbers took up the practice, and, being an intensely competitive group, they soon progressed to using webbing and to upping the challenge.

Over the years slacklining has developed such subgenres as urbanlining, tricklining (the most common type), waterlining (which is done over water, making falling safer), highlining (done farther above the ground and over longer distances), yoga slacklining (performing traditional yoga poses on a slackline), and freestyle or rodeo slacklining (done with a line strung very loosely, which makes it swing more, increasing its instability).

Bowe began slacklining only a year ago, after she saw her friend Kyle Cackett '11 performing on the Green. She thought it looked cool and decided to give it a try. "Since that moment I've been hooked," Bowe says.

Cackett founded the Brown Slackline Club in fall 2010, and he and Bowe work for Gibbon Slacklines, the sport's biggest promoter and the manufacturer of most slackline equipment. Cackett also finished among the top eight at the Gibbon Games competition in Boston this year and competed to become the King of Slackline in the male version of the online competition that Bowe won.

Want to give slacklining a try? Bowe has some advice for you. "For everyone starting out," she says, "it is extremely difficult. You step onto the line, and the line shakes underneath your foot, and you think you will never be able to walk across it. It's just a matter of getting on, falling off, and doing that a million times."

Gordon Morton is a BAM contributing editor. To see Bowe compete, search for Melissa vs. Ellli on YouTube.

Reader Responses to Between The Elms