As a child, Nancy Scull '63 loved collecting stamps. When her father, Edward, an advertising executive in the steel industry, went on business trips to New York City, he'd return with stamps he had bought for her from a local collector. Her favorites were the colorful ones from the British East African colonies, which depicted wild animals or British royalty. Scull, who lived in suburban Philadelphia, dreamed of traveling to these faraway exotic places. 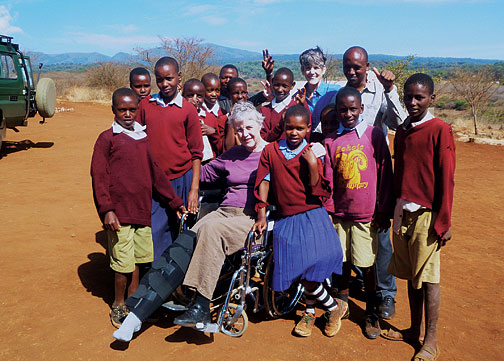 Courtesy Nancy Scull
Scull surrounded by the students at the Meali school in Tanzania.

She finally reached Africa in 2007, more than fifty years later, on a trip that changed her life. She was nine years into retirement, and a friend invited her along on a tour of Tanzania. They visited the usual tourist sites, but then, on their tour guide's recommendation, they traveled to the Meali Primary School in the remote northern village of Karatu. The government-run school on a sprawling coffee plantation taught 350 students in kindergarten through seventh grade. The teachers were in desperate need of almost everything, from school supplies to clean water.

"These kids' parents make maybe a dollar a day," Scull says. "They don't know where their next meal is coming from, and they have no computers, Internet, cell phones, or even electricity or running water. We left there wanting to do anything we could to help."

Over the next four years, Scull raised nearly $100,000 for the school as head of a nonprofit organization she founded called American Friends of Meali. As a result, the school now has a $5,300 rainwater-collection system, two refurbished residences for its teachers, and an ample supply of textbooks, pens, and paper. American Friends of Meali just finished building a student center and now hopes to renovate and electrify the classrooms. Next up is raising money for scholarships that will allow Meali students to go on to secondary school and then college. "I feel like everything I've done in my life has brought me to this point," Scull says.

Scull arrived at Brown to study applied math but before long switched to economics. She spent a summer working in Germany, which intensified her interest in international affairs. But, after two years of economic research for the federal government in Washington, D.C., proved unsatisfying, she moved to Boston and spent the next thirty doing market research and communications work for computer companies. The best thing about these jobs was that they took her all over the world until her retirement in 1998.

One of Scull's recent visits to Tanzania turned out to be more of an adventure than she'd planned. On the first day, she fell and broke her right leg, which put her in a wheelchair for the duration of the trip. Determined, she still made it to Karatu to inspect the Meali Primary School's water and housing projects. She also delivered a scrapbook that students from a school in her hometown of Cambridge, Massachusetts, had put together for the Meali students, part of a scrapbook exchange program Scull had arranged to increase understanding between the two towns.

"This is the most meaningful and fulfilling thing I've ever done," Scull says. "I had an exciting career with lots of travel, but that wasn't doing things for people who really need help. These people really need the help."

For more information on American Friends of Meali go to americanfriendsofmeali.org.

Reader Responses to Dreams of Africa