He Goes for the Jugular

After leaving Brown with a degree in English and American literature, Scott Snyder '98 set off for Walt Disney World—to work, not to visit. He took a minimum-wage job hauling trash on days so hot that the park, he says, assigned costumed employees eight changes of clothing a day. 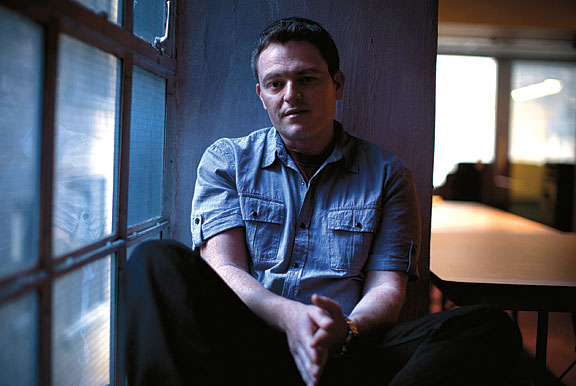 Snyder credits the job with inspiring his career as a horror writer, a calling that has most recently had him creating the American Vampire series and such classic comics as The Swamp Thing and Batman.

"There is a sense of wonder and fantasy in creating this dream world for kids," he says of his Disney days. "It's a strange and schizophrenic experience when you think about the reality of the work and the pay, and then the fantasy world you create at the same time." He says his writing emerges from that same intersection: "It's nightmarish and dark and grim, but it has a possibility of wonder."

As a boy, Snyder was captivated by Stephen King's horror stories. After his stint at Disney, he enrolled in Columbia's MFA writing program and produced a short story collection called Voodoo Hearts, which caught his hero's eye. Stephen King selected two of Snyder's stories, "Wreck" and "Dumpster Tuesday," for honorable mention in Best American Short Stories of 2007. Both embodied the glimmering dark aesthetic Snyder had gleaned behind the scenes at Walt Disney World.

In 2010 Snyder and King coauthored the first five issues of American Vampire, a hit series with art by Rafael Albuquerque. It's the tale of a 1920s vampire named Pearl and her Wild West counterpart, a sadistic outlaw called Skinner Sweet. Without King, Snyder wrote another thirteen issues of American Vampire, which have been collected and published in hardcover. The book won the 2011 Eisner Award for Best New Series, as well as the 2011 Harvey Award for Best New Series.

Snyder also writes narratives for Marvel Comics, which published his Iron Man: Noir and Human Torch 70th Anniversary Special. And last year DC Comics signed him to coauthor Batman: Gates of Gotham, a limited edition about the secret history of Gotham City. In September, DC published his incarnations of Batman and The Swamp Thing .

Writing about an icon like Batman is a singular challenge, Snyder says. "You have to get over the intimidation of writing an iconic character. Put blinders on and have it be your character, the Batman story you would write if you have only one chance." Still, he says, it's daunting to consider the readership. Batman No. 1 has had upwards of 200,000 readers.

"What interests me as a writer are humans and their demons—demons personified as a villain in the story—or a challenge," Snyder says. He isolates the most interesting and strongest traits of his characters and then challenges them, he says, in ways that "go for the jugular."

Reader Responses to He Goes for the Jugular