In 1951 the Oxford University debate team, one of the best in the world, competed in a tournament against a group of inmates from the Norfolk Prison Colony in southeastern Massachusetts. The topic for the evening: should the United States have a free national health service for all its citizens? 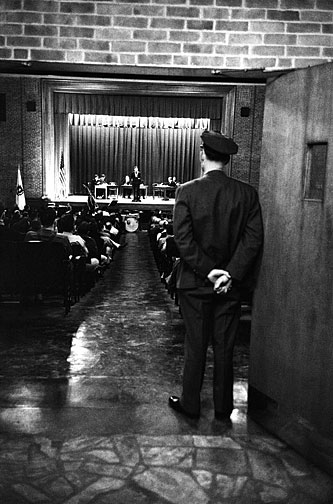 Yale Joel/Time & Life Pictures/Getty Images
A prison guard keeps an eye on the debate between Norfolk's prisoners and Oxford University in 1951. Oxford lost.

As far as debate teams go, the one at the Colony was surprisingly good. Formed in the early 1930s as a way of improving the prisoners' minds, the team had a key advantage over Oxford students. Undergraduates move on after four years, while these inmates were serving terms that often lasted decades, giving them ample opportunity to hone their skills. Over the years, the Norfolk team beat Harvard, Yale, Princeton, and many other elite colleges. They beat Oxford that day in 1951, too. "They're extraordinarily good, you know," one of the Oxonians had to admit.

The history of the debate team at the Norfolk Prison Colony, now known as the Massachusetts Correctional Institution in Norfolk, has recently been unearthed by Adam Bright '05 and Natasha Haverty '08. In June 2010, the pair received $10,000 from Mass Humanities, which distributes money on behalf of the National Endowment of the Humanities, the Massachusetts Cultural Council, and private donors. "The Scourge of New England: An Oral History of the Norfolk Prison Debate Team," as Bright and Haverty's project is called, will assemble interviews with former debaters, prison officials, and some competitors. The two researchers have so far compiled fifty-five hours of audio interviews, along with newspaper clippings, Norfolk Prison newsletters, and such memorabilia as the "certificate of parole" given to each college debater for "having superiorly and honorably acquitted himself in a debate between [his school] and the Norfolk Debaters."

The materials will be archived at the Harvard Law Library, the Boston Public Library, and the Emerson College Library. Bright and Haverty also hope to write an oral history book based on their research. "I wanted to get involved with the magic of people telling their own stories in their own voices," Bright says. He read about the Norfolk debate team in a biography of Leonard Cohen—the famed Canadian songwriter who competed at Norfolk while a member of McGill University's debate team—and then asked Haverty, a freelance writer in New York, to join him.

Haverty says her love of oral history and her interest in prisons started at Brown. Through the Swearer Center for Public Service, she was leading arts workshops for women at a Rhode Island prison and was simultaneously enrolled in an oral history class, The Political Economy of Punishment, with economist Glenn Loury. "Things sort of came together" that semester, she says. After graduating, she enrolled at the Salt Institute for Documentary Studies, in Portland, Maine, where she created a radio feature about the only woman in the state serving in home confinement.

So far the two researchers have spoken to more than a dozen debaters from the Norfolk team. Some of the inmates have gone on to have productive lives and successful careers. Others, having landed back in prison, were interviewed over the phone. One former debater, Roy Shurger, remembers vividly the hours he and his partner spent preparing to argue the negative on the question, Should wiretapping be made legal? They researched the subject in the Norfolk prison's well-stocked prison library. Their teammates grilled them, while their coach—a fellow inmate whom everyone called Doc Richardson—corrected their pronunciation, their emphasis, and the way they projected their voices.

The Norfolk debate team came out of the belief that prisoners could be rehabilitated through education. "Did this program keep people out of prison? Did it keep people from coming back?" asks Haverty. "We are definitely not drawing any conclusions about that."

Still, she and Bright firmly believe that the debate team had merit. It "was the exemplification of the Norfolk philosophy," Bright says. "Get outsiders to interact with the men to make the men feel like men."