It never fit me right," Louis J. Regine '48 says of the football helmet he wore November 15, 1941, when Brown's freshmen scored a memorable 20–6 victory over Harvard. The next fall, Coach Skip Stahley presented Regine, the team captain, with his old helmet. 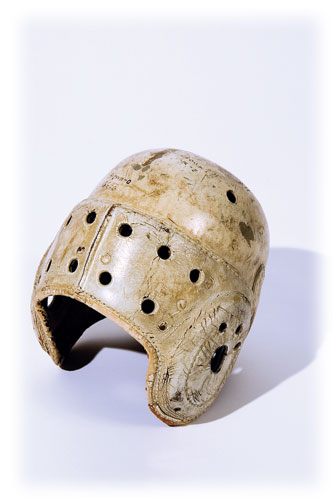 It's inscribed to Regine along with the score and the date, but Regine thinks his grandkids may have penned in the wrong year. He passed the memento on to Brown, where it has come to rest in a glass case on the first floor of the Maddock Alumni Center.

The helmet, of stiff leather, is capped with a metal dome. Its white paint is scuffed and chipped. "The joke in my family is that I was hit on the head too many times," Regine, who is 89, kidded over the phone from Florida, where he lives with his wife, Elaine Laudati Regine '45.

"After sophomore year, I left for the war," he said. In 1946 he returned to campus and to football, where he was first-string center and linebacker. He was again named team captain in 1947, and he graduated the following spring.

Regine was inducted into the Brown Athletic Hall of Fame in 1982, alongside his son, Louis J. "Chip" Regine III '73, another Brown football legend. "It was very moving," Lou said of the ceremony. "I nearly cried." Even over the telephone you could hear the joy in his voice.