You've heard of random acts of kindness—selfless gestures made with no thought of thanks or recompense. Mine tend toward the mundane. I wave forward cars trying to pull out from side streets. I leave an extra coupon near a can of minestrone at the supermarket. 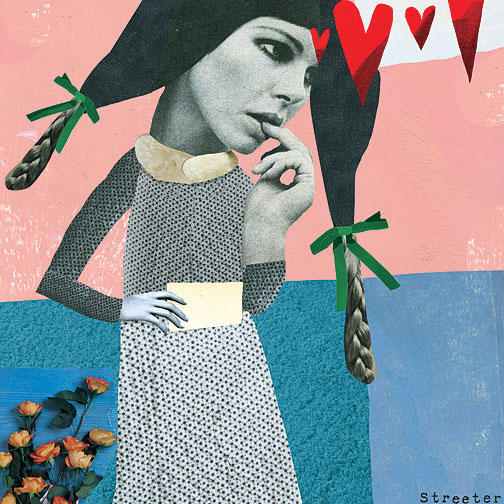 Once, as a lonely Pembroker, I received an anonymous gift that was too grand and too sweet to call mere kindness. Freshman year I lived in Emery Hall, then an all-girls dorm of recent 1960s vintage. Quaint formalities still applied: visiting hours, guest sign-ins at the front desk staffed by motherly Betty McDermott, an intercom to announce phone calls, which we took in hallway booths.

It was bitter February, and my first big college romance was faltering. On Valentine's Day morning, I checked my mailbox and found a card from my boyfriend, wishing me "Happy V.D.," the nasty pun intended. No "Love," no Xs and Os, just his scribbled signature. I was a small-town girl just turned eighteen, and the card stung.

Later that day, Mrs. McDermott paged me on the intercom: "Anne, there's something for you at the front desk." I rode the elevator down from the fourth floor and saw, as I stepped into the lobby, an enormous bouquet of long-stemmed red roses in a glass vase. A florist's gift card bore the following in ballpoint printing:

The two dozen roses were thrilling, gorgeous. I was the envy of my hall. That night when I queried Rich, he bristled. "No, I didn't send them," he said. "Who are you seeing?"

Within the week Rich had dumped me and returned to his prep-school girlfriend, causing me to shed some ritual tears and then move on. The memory of my mysterious Valentine proved more constant, though, comforting me on many an icy Providence night.

Fast-forward to June, 1973. Four days before Commencement, I was buying packing tape at the old Avon Hardware on Thayer Street when I felt a tap on my shoulder.

"Are you Anne Hinman?" asked the young man behind me in line. He introduced himself as a fellow senior. "Our freshman year," he said, "did you get roses on Valentine's Day?"

I gasped. "Yes! I never knew who sent them."

He said, "My friends and I were sitting around our hall in West Quad, going through the Pig Book"—the Brown guys' name for the women's freshman photo album. "We decided to pick someone who looked nice and send her roses."

I was the girl who had looked nice in the Pig Book.

"You guys made me so happy," I told him. "My boyfriend was being a jerk, and I was lonely. Those roses made me feel special. Thank you." What, I asked, did the Pi reference signify? "We didn't know what else to put," he said. I envisioned a bunch of freshmen counting out dollar bills in Clark's Florist while one of them scrawled numbers on a gift card. The image still makes me smile.

That winter of our freshman year, my anonymous classmates committed a perfect act of sweetness. With the serendipitous eleventh-hour reveal, my undergraduate years felt complete.

Reader Responses to My Mysterious Admirer