In December 2008, plastic surgeon Daniel Alam '92 was part of a team of doctors at the Cleveland Clinic who performed the country's first near-total facial transplant. 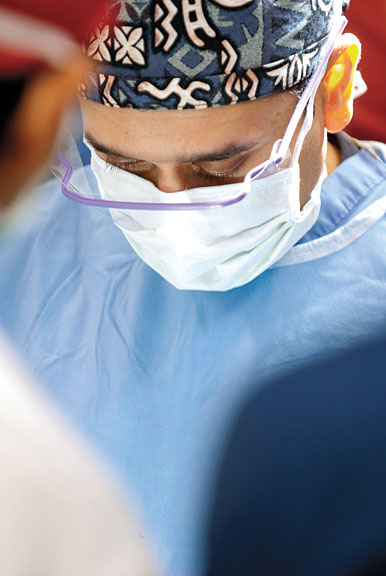 BAM Tell us about the procedure.

Alam In our first face transplant—Connie—I wrote the protocol of the procedure. I went into the donor room and removed the face, prepared it, then attached it and sewed the blood vessels to bring it back to life.

BAM Did you get nervous?

Alam That moment when you detach the blood vessels from the donor and it goes from looking like a living face to looking like a morbid, dead face—I really questioned if I was doing the right thing. Even after doing all this, it didn't really make sense to me how this lifeless, corpse-like, mask-like, rubbery face was ever going to become something that smiles or laughs. For that one hour, I didn't actually believe it was going to work.

BAM How did you get through that feeling?

Alam Ninety-five percent on a case like this is just going on adrenaline. I actually couldn't sleep after the procedure. Once I finally crashed after that, I took three days off work.

BAM How did the patient react to her new face?

Alam The patient described the surgery this way: "I became a cocoon, and then I became born as a new person." It's a strange, difficult adaptation for them. They have to start fresh as new human beings in a sense, but at least they're human beings, and, when they meet people, they can interact and redevelop relationships. When you talk to Connie or Charla, they don't say that what they've gained out of the procedure is the ability to eat, or speak. What they say is, "I'm now a human being."

BAM What about the patient's teenage daughter?

BAM Can the transplanted face do everything the patient's original face can do?

Alam Yes. Their faces move, their faces feel, they laugh, and they interact socially. The most impressive moment I've had in taking care of all this was in May 2011 when I got invited to Barcelona to lecture with all seven teams who had done face transplants in the world. Now there have been nineteen transplants done—I've been involved in two.

Alam When I was there, I actually sat and had a beer with a patient from another team [who had undergone the surgery before our 2008 patient] who had gone through all the revision surgeries. We are sitting in a bar in Barcelona, he's laughing, he's joking, nobody knows the patient has had this procedure, and it's done. To see a patient who has now become fully socially integrated, to see that transformation, was remarkable.

BAM How are the patients doing now, three years later?

Alam The most important element of this surgery is about trying to return people back to human relationships and socialization. Successful surgery is simply the first step toward this goal. After three years, Connie still needs to take her medications and could still benefit from some minor cosmetic revisions. But she has integrated back into her world as a mother and grandmother.

BAM What lies ahead for you?

Alam I've visited about fifty universities around the United States and have talked to them about starting programs. I think in the next generation, like with any new procedure, it's going to truly become a standard of care where twenty institutions have done hundreds of them.