Writing from His Roots

As a young man, Ayad Akhtar '93 was inspired by novelists Saul Bellow, Bernard Malamud, and Philip Roth and their depiction of the American Jewish community. They might seem unlikely models for a first-generation Pakistani American who grew up in Wisconsin. But what struck a familiar chord was the American tendency to lump together American Muslims and American Jews on the basis of their faith rather than their nationality. In fact, Akhtar says, each group is "a polyglot, very diverse community that is nevertheless identified by the dominant culture as a religious community with a religious identity." 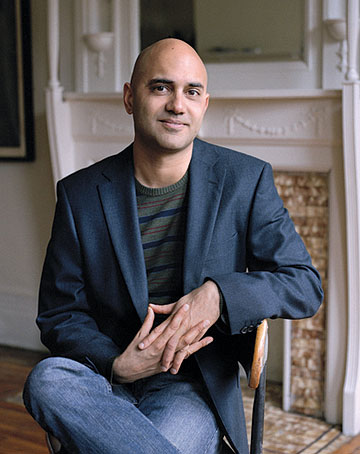 Courtesy Ayad Akhtar
Ayad Ahktar is making his literary debut with a novel and two plays.

Akhtar has been many things through the years: actor, acting teacher, screenwriter, playwright, novelist. Now at age forty-one he's having what he calls "a breakout year." American Dervish , his debut novel about a Pakistani American boy whose life is forever changed when his mother's friend moves in from Pakistan, has just been published. His first two plays, Disgraced and The Invisible Hand, are premiering, respectively, at Chicago's American Theater Company in January and at St. Louis's Repertory Theatre in March. In Disgraced, a Muslim American lawyer renounces his roots to climb the corporate ladder. In The Invisible Hand, a U.S. trader is kidnapped in Pakistan.

"I think of myself as a dramatic storyteller," Akhtar says. "Giving literary form, dramatic form, to the lives that I am in contact with, metaphorically and actually, is really the best artistic endowment."

Akhtar, who lives in Harlem, has only recently gone back to theater, his concentration at Brown, after deciding he'd had enough—at least temporarily—of the frustrations of the film business, he says. He just finished his third play, and is working on another novel and a script for his feature directorial debut.

His Muslim identity didn't become an integral part of his self-awareness until a few years after 9/11, Akhtar says. To mature as an artist, he saw that he needed to embrace the entirety of his experience, he says: "It was about my own personal development, about accepting certain parts of myself that I was aware of—or in flight from. My turning to really see where I came from coincided with a burst of creativity that allowed me to give form, shape, and voice to a community that I have known all my life."

Akhtar says his work is not about making political statements. "I am not interested in apologetics or vilification, [in] what Muslims' roles are in the culture, whether they are unjustly treated," he says. "The discussion I am interested in is to give shape and form to that experience."

At Brown, Akhtar focused on acting, while also directing and producing plays, and he went on to study directing at Columbia's graduate film program.

"Brown remains to this day the environment where I met more original, driven, creative people at higher density than any other place I have ever been," he says. The experience taught him to always "remain open to the possibility that something can be, rather than be hedged in by the reality of what it is. I have done that in boom times, and in sad times. I still have the sense that anything is possible. I still feel like that, more than ever."

Elena Ferrarin is a freelance writer in Chicago.

Reader Responses to Writing from His Roots