The Future of Print News

Will a day come when the print newspaper is obsolete? In late September, the New Orleans Times-Picayune, which had earned two Pulitzers for its Hurricane Katrina coverage, printed its last daily edition and joined the ranks of papers printing just three days a week and otherwise publishing only online. Three years ago, the Seattle Post-Intelligencer became an entirely digital news outlet. 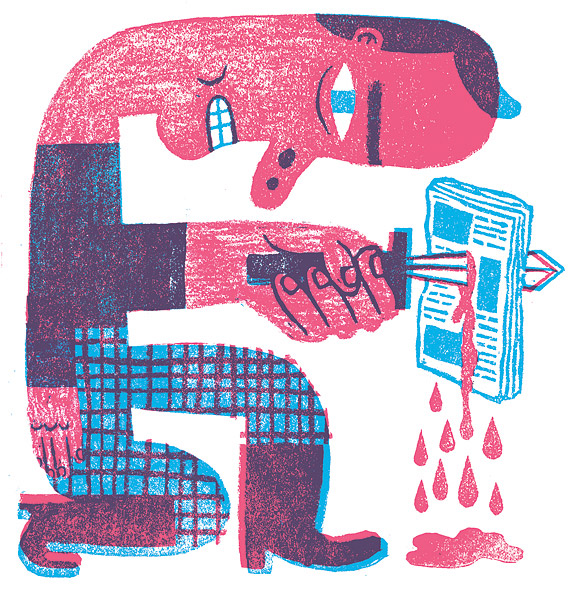 While researching my recent book about the New York Times, I interviewed more than forty Times people, including every living executive editor, many past and present masthead figures, and publisher Arthur Sulzberger Jr. What emerged is a picture of a struggle to produce what may still be the world’s best newspaper at a time when both the economy and the technology of publishing threaten its quality and stature.

At the New York Times Company, which owns the Times, the Boston Globe, and the International Herald Tribune, salaries and newsprint prices have risen while revenues have dropped. The Times’s news and editorial staffs have been cut by 25 percent in recent years. The company has eliminated stock dividends and seen its share price drop precipitously. Internet advertising revenue has not replaced lost print advertising; for every twenty-five dollars of  print advertising lost, only one advertising dollar comes to the Internet sites.

The instant availability of news on the web has meant that the print Times, like all newspapers, can no longer be the first source of breaking news. Thus it has increased the amount of analysis in its pages, both in the “Sunday Review” section and the daily paper, and, especially, at nytimes.com. It has also compensated, and tried to slow the decline of its print readership, by reshaping itself into a newsgathering organization that now produces a hybrid magazine-newspaper on its Internet site as well as in print. In addition to focusing on investigatory journalism, it has ratcheted up its cultural coverage, while making its national edition more local by offering Chicago, Texas, and San Francisco Bay Area editions.

Finally, the Times now does much more of what is called value-added journalism, or what I call “life school.” It offers practical advice on virtually every conceivable subject, including retirement, investment, health, nutrition, restaurants, caring for elderly parents, and charitable giving. In these ways, the Times has become more like a magazine.

The Times still invests huge resources in international reporting. You may see Anderson Cooper on the tarmac, but the Times is the only U.S. media source that, with its twenty-six foreign news bureaus, covers places like Syria, Afghanistan, Iraq, and Pakistan in depth. The major networks and cable stations, as well as other newspapers, “borrow” international news from the Times site without paying the Times anything.

The Times is committed to publishing a print newspaper for the foreseeable future, but it might eventually take a different form than the huge daily newspaper we now have. For the print edition to survive in the long term, one model might be a short newspaper like the International Herald Tribune combined with an optional separately marketed weekly magazine.

My interviews with Times senior staff left me with the impression that, notwithstanding low morale as a result of its financial problems, or major journalistic lapses such as its false reports of weapons of mass destruction in Iraq, the major editors are mostly dedicated people of great integrity who have a deep commitment to truth and fairness. But, aware that the very life of the print paper is in danger, they are struggling to anticipate newsgathering’s next chapter.

Cornell English professor Daniel R. Schwarz is the author of Endtimes? Crises and Turmoil at the New York Times, 1999–2009.

Reader Responses to The Future of Print News