The Urge to Create

As her graduation approached six years ago, Clare Frost couldn’t imagine herself moving to New York City, finding a job and an apartment, and heading to work each day. “I started to get very depressed,” she says. 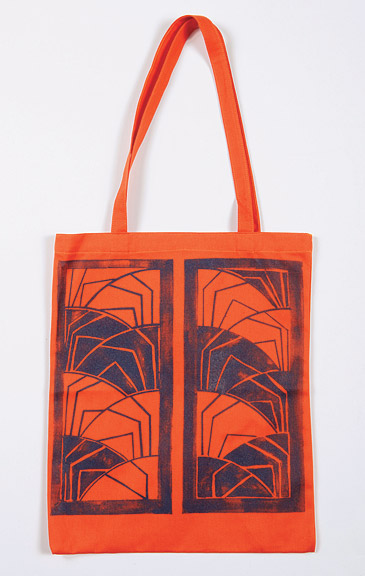 Joel Benjamin
Clare Frost '06 prints colorful tote bags with images of Istanbul's distinctive iron doors. $20. For free shipping, mention Brown when ordering.
www.etsy.com/shop/snowinistanbul
Raised in a family of diplomats and explorers, Frost spent her elementary school years in London, from which her family traveled all over England and France. After Brown, she moved to Tuscany, where she volunteered at an organic vineyard. There, her boss introduced her to Josephine Powell, a formidable ethnographer, textile artist, and expert on Anatolian kilims. The elderly Powell, who lived in Istanbul, needed an assistant, so Frost moved in with her, “researching in books on Turkish carpets, listening to her stories, and cooking her spaghetti.”

Today, Frost still lives near Istanbul on one of the Princes’ Islands, with “a big view and a pack of hounds,” as she writes on Snow in Istanbul, her shop on the Internet site Etsy.

In Istanbul, Frost has brought together two of her interests, architecture and textiles, to produce tote bags on which she’s silk-screened images of the iron doors that became popular on Istanbul’s apartment buildings in the early years of the Turkish Republic.

Frost, who concentrated in both  architectural studies and Hispanic literature and culture at Brown, first became interested in textiles after she met antique textiles dealer and designer Elizabeth Hewitt through Powell. Hewitt offered Frost a job at Tulu Textiles, Hewitt’s high-end line of hand-printed fabrics and bedding. Traveling to India and Uzbekistan to see the workshops and weavers’ homes where Tulu’s textiles were being made, Frost became aware of the links between the traditions she had studied with Powell and the contemporary designs Hewitt was creating at Tulu.

Now a sales manager for Tulu, Frost is passing on her sense of the links between old and new to other women. “Since early 2011,” she says, “one of my main jobs has been working with an Afghan foundation that supports women through traditional Afghan handwork.”

Frost is also creating her own textiles and clothing. She recently launched a collection of kimonos and the shorter Japanese jackets called hippari, custom-printing silk with her own patterns—you can see them at clarelouisefrost.com . She’s also developing handwork for dresses and small accessories and teaching Afghan women to embroider and bead her designs. She hopes to have her collection ready next spring.
“In a way, being a designer is lucky,” Frost muses. “If you have the urge to create anything, and if that urge can be reproduced and sold, then maybe you can make money doing what you love.”

Reader Responses to The Urge to Create