At the heart of every town-gown dispute is whether having a private university in town really benefits a city. More specifically, because a nonprofit institution like Brown doesn’t pay taxes—though it does make negotiated payments to the city every year—is it doing its fair share to help the local and state economy around it? 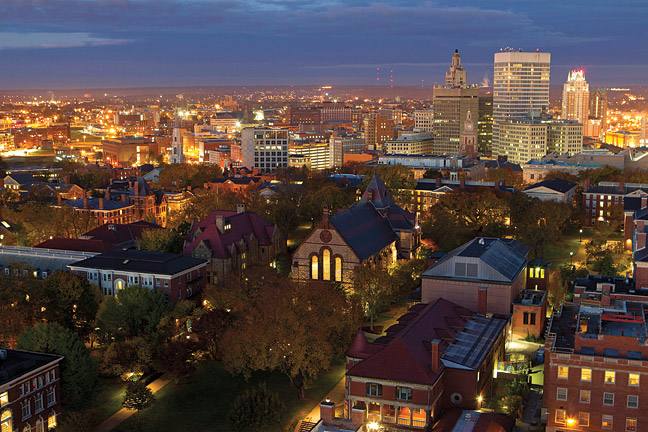 “Research, innovation, and creativity are essential components to strengthening Rhode Island’s economy,” President Paxson said when she released the document. “This report illustrates that Brown has an important role to play in economic growth.”

With 4,459 employees—81 percent of them live in Rhode Island—the University is the state’s fifth-largest employer. Brown also generates significant economic activity through construction and through student and visitor spending in the state.

Highlights from the report:

Patents and licenses In fiscal year 2012, Brown filed 98 patent applications on technologies first developed at the University. In addition, it was awarded fifteen new patents, entered into six licensing or option agreements for commercial use of new technologies developed at Brown, and received nearly $1.6 million in licensing revenue.

Of the $132 million spent on construction in 2011, nearly $90 million was devoted to medical and research facilities, resulting in 208,000 square feet of new or renovated space and creating 705 full-time equivalent jobs.

Local officials are apparently impressed. “Brown,” says Providence Mayor Angel Taveras, “is Providence’s major-league franchise, and the University’s successful development as an internationally renowned research university is a driving force in our efforts to create jobs, attract investments, and grow Rhode Island’s capital city into a regional hub of the twenty-first-century knowledge economy.”

Download a PDF of the Appleseed report at brown.edu/about/reports/economic-impact