Kathy Griffin Neset ’78, an experienced businesswoman in the oil industry, says she recently got a call from an employee complaining about conditions at an oil-drilling site. “Kathy, I just can’t work in this trailer. There’s no door on the bathroom,” the woman told Neset. “My answer was, ‘Oh! You have a bathroom!’” Neset laughs. When Neset started out in the oil industry in the late 1970s, there were almost no women in the business. Ladies rooms were a rarity. 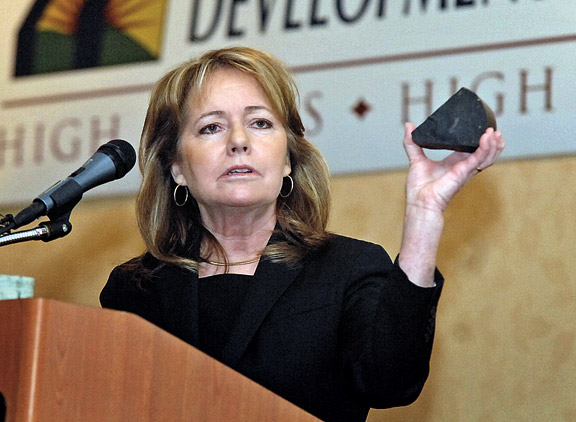 Courtesy Kathy Neset
Neset has played a vital role in North Dakota's oil boom.
Neset is part of the reason that many believe the United States may soon be the world’s leading oil producer. She runs Neset Consulting Service, a Tioga, North Dakota, company that specializes in geo-steering—helping oil companies bore their wells into rock formations that will yield the most oil. She has crews working on almost half of the state’s 200 active drilling rigs. The plains of North Dakota are experiencing the biggest oil boom in a generation, and Neset’s success in helping companies find oil has made her one of the local oil industry’s key players.

Neset grew up in New Jersey, the only girl in a family of nine children—excellent preparation, she now realizes, for the rough-and-tumble world of the oilfield. She concentrated in geology at Brown, and then went to work in East Texas with an oilfield consulting company. “I had no idea what I was getting into,” she recalls. She soon followed the oil to Wyoming and North Dakota, meeting her husband, Roy, at a drilling site. Roy’s family had arrived in North Dakota in the 1800s from Norway and set up a homestead outside Tioga. In 1980, Neset and Roy founded Neset Consulting, and during much of the 1980s and 1990s, when the oil industry was struggling, they farmed durum and flax and took odd jobs such as substitute teaching. During boom times they focused on oil. Roy died in 2005, and now Neset runs the company with her two sons.

Two miles below the northern Great Plains sprawls the Bakken, a 360-million-year-old layer of rock that is the source of North Dakota’s recent economic prosperity. (On Neset’s website, you can buy a sweatshirt that reads, “The Bakken is Our Bacon.”) Tens of thousands of miles in diameter, the Bakken may hold up to 200 billion barrels’ worth of oil, which until fairly recently was inaccessible. That began to change in the 1980s, when oil companies began drilling horizontal wells. More recently, the controversial technique called hydraulic fracturing, or “fracking,” has enabled oil companies to fracture the rock around the oil well to keep the oil flowing.

Many environmentalists believe fracking contaminates ground water and causes health problems, but Neset insists the practice is safe. Her own private drinking water, she says, comes from a well on her farm, which is close to fracking sites. “We know we’re contributing to our national security by promoting and developing domestic energy, and doing it safely and responsibly,” she says. “There’s a good feeling in North Dakota that we’re helping with our energy independence.”