It’s been a good year for the political press at Brown. Both the print magazine Brown Political Review and the online publication “Brown Politics Memo” released their first issues during the fall semester. Politics, says Benjamin Wofford ’15, coeditor of the Brown Political Review, “is the last, best, only hope. I view the circus-ness and absurdity of it as evidence that it’s real.” 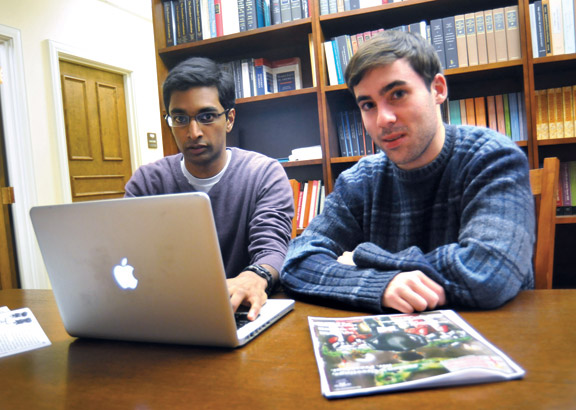 Frank Mullin
Haakim Nainar '14 and Benjamin Wofford '15, cofounders of the Brown Political Review, are creating a forum for nonpartisan political discussion.
Wofford transferred to Brown in his sophomore year and immediately noticed the lack of a student-run journal of politics. Having worked on one at Penn, his previous school, he was shocked that Brown was the only Ivy university without one.

The Review is the result of nine months of planning by Wofford, coeditor Haakim Nainar ’14, and three other founders: Alexandros Diplas, Todd Harris, and Oliver Hudson, all class of ’14. It runs to around thirty pages and will appear twice a semester. Funding is from the Political Theory Project.

The magazine’s first issue featured interviews with Washington Post blogger Ezra Klein, the powerful conservative Grover Norquist, and former presidential candidate Howard Dean. The student-written pieces include analyses of sectarian divisions in Lebanon, the effectiveness of foreign aid, and the future of the Republican Party. Nainar says the aim is to be nonpartisan. “Brown students like to break with binary thinking,” he says. “You’ll read pieces where you’ll wonder, ‘Where does this fit on the political spectrum?’”

Politics runs in Wofford’s family. His great-grandfather, Harris Llewellyn Wofford, served as a senator from Pennsylvania in the early 1990s, and in 2002 Benjamin’s father, Dan Wofford, narrowly lost an election to represent southeastern Pennsylvania in the U.S. Congress. Wofford helped out on his father’s campaign and has worked on several others since. “Politics is my passion,” he says.

“Brown Politics Memo” is more of a political blog than a polished magazine. It also maintains a Twitter feed and aims to be nonpartisan. The “Memo” has chosen not to accept any funding from the Undergraduate Council of Students or from Brown in general so it can maintain journalistic independence.

“It’s all sort of happening at once,” says the Brown Political Review’s Wofford. “Who knows? Ten to fifteen years from now, people might look back on it as some sort of political renaissance.”