When Ray L. Heffner became the thirteenth president of Brown in October 1966, U.S. universities were becoming cauldrons of dissent. Faced with students ever more forceful in their demands on such issues as civil rights and the Vietnam war, presidents found themselves trying to navigate a course for their schools through protests that were becoming increasingly disruptive, and even violent. 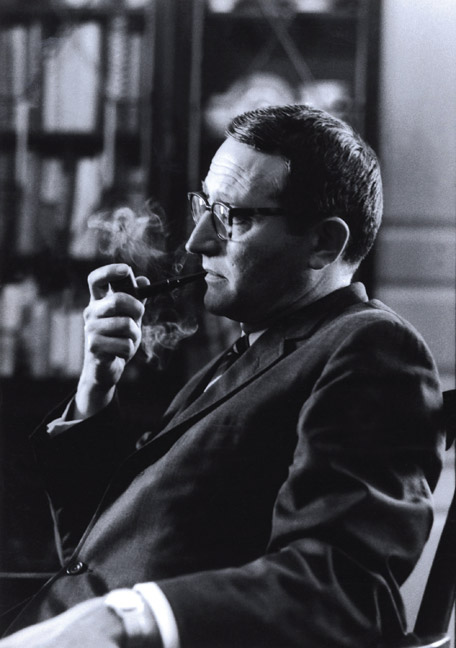 Brown Archives
Despite the brevity of Heffner's tenure, his accomplishments included promoting medical education and recruiting more African American students.
Heffner, who died of cancer on November 28 at the age of eighty-seven, had been a longtime English professor and administrator at the University of Indiana and the University of Iowa before the Corporation asked him to lead Brown. He was a deliberate and thoughtful leader at a polarized time that was seldom kind to moderate presidents. On the Brown campus, which, to Heffner’s credit, remained nonviolent during the period, the local controversies included the low rate of African American representation among Brown students and faculty, the status of ROTC, and the historic overhaul of the academic program, which became known as the New Curriculum.

“I must remind you,” Heffner said in a speech he gave to seniors and alumni in 1968, “that this is a cruel world, not only for those in their twenties but also for those over forty. It is as hard for us to tolerate the self-righteousness and intolerance of some of the young as it is for you to put up with the irrationality, the pragmatism, and the conservatism you find in some of us. We must try to deal with each other as human beings, not just as symbols—with compassion and a little humor, not just with rectitude.”

When Heffner resigned in May 1969, fewer than three years into his presidency, he admitted, “I have simply reached the conclusion I do not enjoy being a university president.” He hinted at why during a press conference that day. The job, he said, would be a good one “for the right person who … really enjoys living in some state of tension and strain.”

Reacting to Heffner’s resignation, Juan Lopez-Morillas, who was then chairman of the comparative literature department, noted that, when Heffner took office, “stability, detachment, and leisurely change, as long-established norms of American academic life, were beginning to give way to uncertainty, involvement, and restlessness. The university, once a haven in a stormy world, has itself become a center of turbulence.” Heffner was not alone in finding the tension and strain intolerable. The presidents of Cornell, Columbia, and the City College of New York also announced their resignations at around the same time.

Despite his early resignation and the brevity of his tenure, Heffner’s accomplishments were hardly minor. He spoke in speeches about the need for the United States to do more to ensure equality among its citizens, and he enacted a $1.1 million enrollment initiative to bring more qualified black students to Brown. He promoted a new medical education program that eventually became the Alpert Medical School and oversaw the planning of the Sciences Library and the groundbreaking of the Graduate Center. The day before his resignation, the faculty voted to adopt the New Curriculum.

One issue that particularly frustrated Heffner was ROTC. In response to growing student and faculty objections to the presence of ROTC on campus, he appointed a campus committee to review the air force and navy programs. In March 1969, after the faculty voted to strip ROTC of its academic status at Brown, the air force program pulled out, but despite the faculty’s wishes, Heffner, a U.S. Navy veteran who’d served in the Pacific during World War II, renewed navy ROTC for another year. “That,” his wife, Ruth, told the New York Times after his death, “was one of the central issues, from his point of view, for leaving.”

Born March 7, 1925, in Durham, North Carolina, Heffner at sixteen entered Yale, where, after serving in the navy, he also earned a master’s and a PhD. He taught at Indiana and Iowa for forty-two years, becoming vice president and dean of faculties at Indiana and provost at Iowa, where he returned to teach after resigning from Brown. He retired in 1996.

Have an anecdote about President Heffner? E-mail it to alumni_magazine@brown.edu with the word Heffner in the subject line. Or post your comment at the end of this article.