How to Feel Safe

On a mid-July day this summer, the second floor of South Providence’s Sgt. Cornel Young Jr. Elementary School teemed with fifty-five children and their counselors, most of them Brown students. In one classroom, eleven- and twelve-year-olds studied symmetry, dividing various shapes in half. Down the hall, seven-year-olds raced to see who could be first to write an odd number or draw a triangle on the whiteboard. 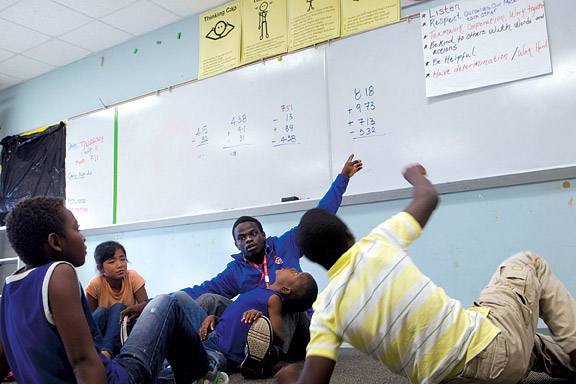 Mike Cohea
Counselor Jean-Jacques Yves Sibomana '14, who was a Rwandan refugee himself, helps students with some basics.
Now in its third year, this summer camp is an offshoot of the Brown Refugee Youth Tutoring and Enrichment (BRYTE) program, which pairs Brown students with local refugee children for one-on-one language instruction during the school year. The summer camp was formed to reduce the amount of knowledge children lose over the summer and also to prepare newly arrived refugees—many of whom speak little if any English—to start school in the fall.

The fifty-five children who attended the BRYTE camp this summer ranged from seven to twelve years old and were fleeing such difficult places as Eritrea, Nepal, Burundi, Burma, and Senegal. For six weeks, they spent their mornings in literacy and math classes; afternoon activities included dance, arts and crafts, and science projects. They swam at a local YMCA, picked blueberries, and took field trips to the Providence Children’s Museum, the RISD Museum of Art, a Pawtucket Red Sox game, and even the local landfill, where they got a lesson on recycling.

“At camp,” codirector Sophie Mc-Kibben ’16 says, “they learn that learning can be really fun and they can be with kids their own age and level.” 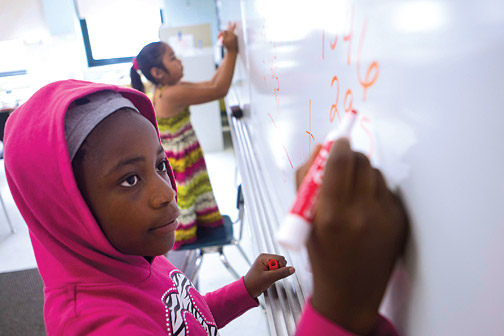 The counselors received intensive training from local teachers last spring, and campers’ literacy skills were tested at the beginning and end of camp. Past test results indicate that nearly all of the campers not only avoided learning loss, but advanced over the summer months.
The camp helps kids socially, too, says Alan Flam, director of advising and community collaborations at Brown’s Swearer Center for Public Service, which oversees the BRYTE program. School can be especially isolating for refugees, he says, and camp is a place  where they feel secure. “The students walk around the spaces and participate in the activities with a feeling of safety and an ability to participate that I don’t think they always feel during the course of the academic year,” he says.

Counselors assist campers’ families, too. “It’s something that’s missing from a lot of other programs and something that BRYTE does very well,” says Cathy Fox, an ESL teacher in Central Falls who helped develop the summer curriculum. Veneranda Baguma, a refugee from the Democratic Republic of the Congo, sent her three children to the BRYTE summer camp. “I am grateful because here at home there is no place for the kids to play. It’s not safe outside and inside there’s no room. It’s also good because they are learning English and math. We are old and don’t benefit from learning as much. But they are learning, and it’s good, because this is their country now.”

Reader Responses to How to Feel Safe