If you find yourself on campus this semester, keep your smartphone handy. The odds of glimpsing Brown’s legendary, if elusive, Professor of Psychoceramics (cracked pots) Josiah S. Carberry are particularly good. September and December both feature Carberry Days—Friday the thirteenth—and in his honor the University Library has announced a series of celebrations, including the release of the documentary Made Not Born: The Wife and Dimes of Professor Josiah S. Carberry. 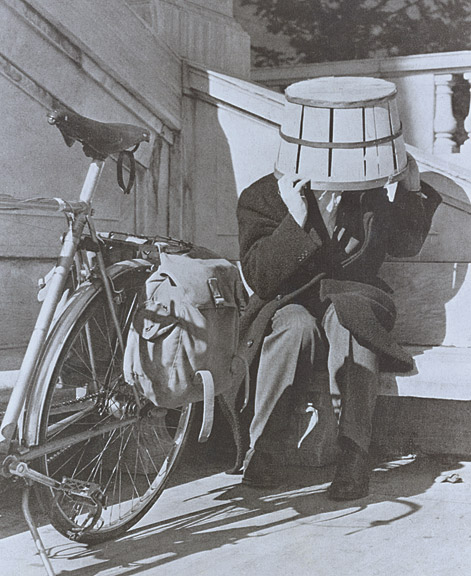 For those of you who may not yet be familiar with Carberry or his unusual accomplishments, since 1955, at the request of an anonymous donor, Brown librarians have distributed cracked pots around the campus every Friday the thirteenth to collect change for the Josiah S. Carberry Fund, which honors his “future late wife” and is to be used “to purchase such books as Professor Carberry might or might not approve of.”

In the decades since he joined the Brown faculty in 1929, Carberry has been spotted around the globe, inspiring the New York Times to dub him “The World’s Greatest Traveler.” His comings and goings are the subject of Made Not Born, which Professor Emeritus and Friends of the Library board member Don Wilmeth presented September 13 in the Rockefeller Library’s Digital Scholarship Lab. In the film Wilmeth interviews Carberry’s friends and fans, and the documentary is rife with images of Carberry rounding a corner or bustling off with his luggage. You can see (or not see) the movie on YouTube.

Other events on the Carberry slate included a September Faculty Club buffet based on the Carberry Cookbook: From Nuts to Soup, and in December a Carberry Society Dinner, at which the Library promises that Professor Carberry might, or might not, appear to discuss The Philately of Ionian Revetments.

In a concession to the age of social media, the timeless Professor Carberry has graciously consented to allow us mortals to follow him on Twitter at #JosiahCarberry.