Brown’s impact in the White House took a leap forward this summer when the U.S. Senate confirmed Thomas Perez ’83 as secretary of labor and President Obama nominated Karen Dynan ’85 as assistant secretary for economic policy at the U.S. Treasury Department. 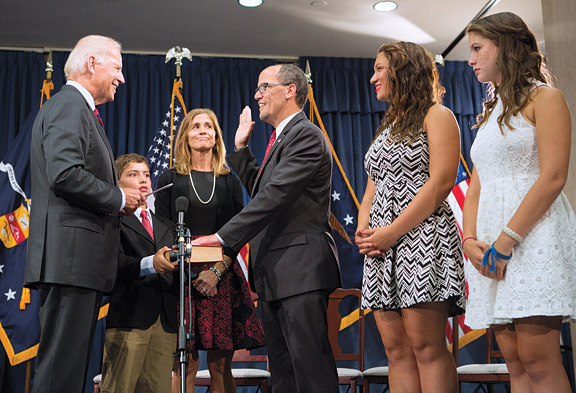 Department of Labor
On September 4, Vice President Joe Biden swore in Thomas Perez '83 as U.S. Secretary of Labor. Perez's son held the Bible while his wife and daughters looked on.

The confirmation makes Perez, the son of Dominican immigrants and the subject of the BAM’s May/June cover story, the country’s top-ranking Latino official. It also elevates him to the highest U.S. government office held by a Brown graduate since the 1920s, when Charles Evans Hughes, class of 1881, served as secretary of state under President Warren G. Harding. (The last alum to hold a Cabinet-level position was Richard Holbrooke ‘62, who was U.N. ambassador under President Bill Clinton.)

Perez, who grew up in Buffalo, New York, studied international relations and political science at Brown and earned a joint degree from Harvard Law School and the John F. Kennedy School of Government before embarking on a career in the Justice Department’s Civil Rights Division under presidents Ronald Reagan, George H.W. Bush, and Clinton.

Perez joined the Obama administration as assistant attorney general for civil rights after working on Capitol Hill and in local and state politics, as an aide to U.S. Senator Ted Kennedy; as Maryland’s Secretary of Labor, Licensing and Regulation; and as a councilman in Montgomery County, Maryland, representing a district including his hometown of Takoma Park.

But more than anything, it has been his aggressive stint as the nation’s top civil rights lawyer that has won him fans on the left and detractors on the right. Perez embraced an expansive federal government role in leveling the playing field for all Americans in all corners of life. He dove into some of the most ideologically contentious fights of the era, from voting rights to treatment of immigrants to racial profiling. He advocated for people with disabilities and used civil rights laws to win large settlements from lending institutions responsible for a foreclosure crisis that disproportionately affected communities of color. He also launched numerous investigations into questionable police practices.

Senate Republicans spent four months stalling and threatening to filibuster Perez’s nomination, painting him as an unrepentant ideologue. Points of contention included his fight against voting restrictions passed by GOP-led states, such as strict voter-identification laws that would have largely affected minority voters who vote mostly for Democrats. Perez used a key section of the landmark Voting Rights Act of 1965—which the U.S. Supreme Court has since watered down—to block laws in places like Texas and South Carolina.

Critics also focused on Perez’s opposition to state laws targeting illegal immigrants and his handling of a convoluted housing rights case in St. Paul, Minnesota, that they contend Perez improperly settled. In the end, the vote, 54–46, followed strict party lines.

President Obama’s August nomination of Karen Dynan ’85 to be assistant secretary for economic policy at the U.S. Treasury Department is likely to meet less resistance. Dynan, who has a PhD in economics from Harvard, will leave the Brookings Institution, a Washington, D.C., think tank, where she has most recently been the vice president and codirector of its economic studies program. Her focus has been primarily on consumer spending and saving behavior, household debt, and foreclosure prevention. From 1992 to 2009, she worked at the Federal Reserve Board of Governors, mostly as a senior adviser in the division of research and statistics. Among her areas of study were macroeconomic forecasting, household and real estate economics, and the federal policy response to the financial crisis.

Dynan, whose appointment re-quires Senate confirmation, worked in the federal government from 2003 to 2004 as senior economist on the White House Council of Economic Advisers. Incoming treasury secretary Jack Lew said that Dynan “is a world-class economist” who “shares our commitment to strengthening the middle class.” If confirmed, she will advise the administration on a broad range of economic matters, from labor and housing to job creation.

Reader Responses to On the Inside