It may have concluded too late to interest the late Elmore Leonard, but this summer marked the final chapter in The Case of the Civil War Sword, a theft that has nagged at Brown’s lawyers since 1977. It was then that an ornate Civil War-era sword and scabbard went missing from the Annmary Brown Memorial. 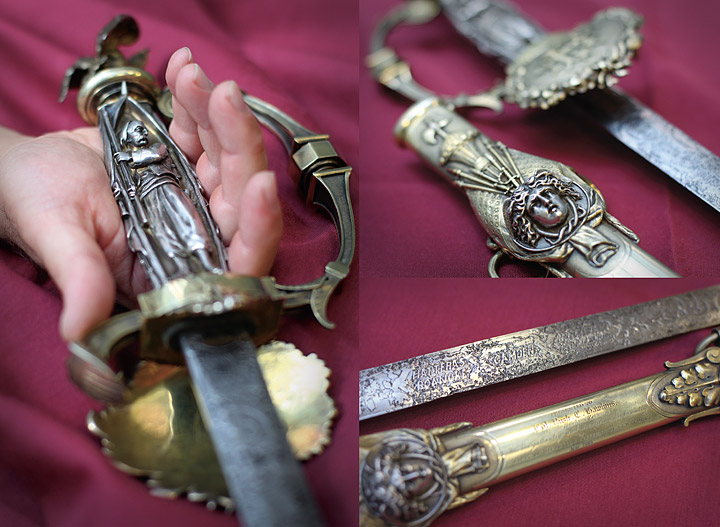 Frank Mullin
Clockwise from left, a uniformed Zouave on the hilt, Medusa on the scabbard, and the inscriptions that identified the sword as Hawkins'.
The sword originally belonged to General Rush C. Hawkins, who was among the first to heed Abraham Lincoln’s call to arms. Hawkins assembled the Ninth New York Volunteers, a brigade celebrated as Hawkins’s Zouaves for its light infantry tactics and showy uniform: purple fez, short jacket and vest, blue sash, and blousy trousers.

In the early years of the Civil War the unit distinguished itself on the battlefields at Hatteras, Roanoke Island, Camden, Fredericksburg, Suffolk, and Antietam. And in May 1863, fifty prominent New Yorkers gathered to honor Hawkins with speeches and a ceremonial sword and scabbard that were intricately wrought in sterling silver and gold by Tiffany and Co.

The scabbard is inscribed: “Presented to Col. Rush C. Hawkins, of Hawkins Zoaves. For his gallantry and devotion to his country.” At the top of the hilt is an eagle, and on each side is a high-relief figure of a Zouave on sentry duty. The steel blade is inscribed with the names of battles in which the unit fought.

Hawkins was seriously wounded, but he returned to serve, and eventually was mustered out as a general. He embarked on a successful career as a New York attorney and married Annmary Brown, granddaughter of Nicholas Brown, after whom the University is named. A serious art collector, Hawkins also amassed one of the world’s great collections of incunabula, the first generation of books to be produced on the printing press.

After his wife’s death, he built the Annmary Brown Memorial to house their collections and crypt in a museum. Strapped for cash, in 1975 Brown closed it temporarily. When the building reopened in 1977, an archivist found the sword’s blue velvet-lined mahogany case empty. In 1991, a collector spotted the sword at a Baltimore arms show and tipped off Brown, which made a claim. But by that time a Williamsburg Civil War collector named Donald Tharpe had bought the sword.

That might have been the end of the story had Tharpe not loaned the sword to a municipal museum in Newport News, Virginia. There, a military historian spied it in the early 2000s and notified the University. In 2011, Brown’s lawyers filed suit against the City of Newport News (which owns the museum), as well as against Tharpe and his wife. According to court documents, the couple had bought it from a dealer for $35,000 and was offering to sell it for $750,000. Brown, the Tharpes claimed, had no proof that their sword and scabbard were the ones that had been stolen.

In June, after a three-month trial, a federal judge decided in favor of the University. “At its heart,” said Beverly Ledbetter, vice president and general counsel, in a June 7 news release, “the University’s case was quite simple and in three parts: We own it; it was stolen; we want it back.”  The sword and scabbard are now in a campus vault, awaiting their official unveiling on November 7.