Fifty years ago, on November 22, 1963, when President John F. Kennedy was brought to Dallas’s Parkland Hospital, “no one was prepared for what unfolded,” says Peter Landesman. “The hospital thought Kennedy was coming in with a cold. The first doctor to greet him was a twenty-six-year-old resident, who was alone with the president for long minutes, as the president bled out on the gurney.” 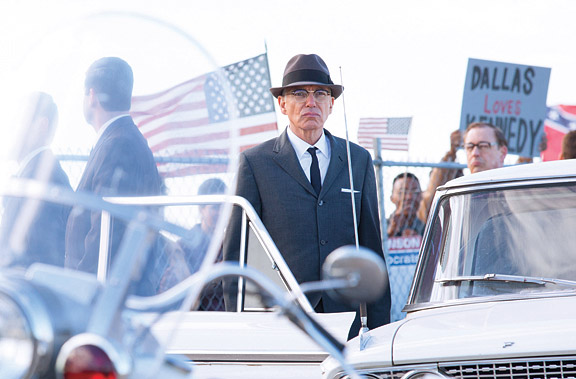 Billy Bob Thornton plays Forrest Sorrels, the head of Dallas's secret service.
The people who acted out of the spotlight during that afternoon’s chaos are the true subject of Landesman’s movie debut, Parkland. While Kennedy’s assassination has been scrutinized endlessly by historians and conspiracy theorists, Landesman found the events of the day and the ordinary people drawn into them a more compelling story. “There was a fight over the body between the Secret Service and local Dallas police,” he says. “There was simultaneous drama with Johnson, the new president, over when he’d leave and how, and with or without Kennedy. No one knew if an invasion had begun, or a coup. No one thought at that moment that this could be the act of a lone, sad, desolate, sociopathic gunman.”

Landesman had no directing experience or formal training when he took charge of the project last winter, yet he says he felt right at home telling Oscar-honored actors Paul Giamatti, Billy Bob Thornton, and Jacki Weaver what to do. “I know it may sound foolish or maybe arrogant,” he says, “but from the first frame of the movie I felt as if I’d been directing films my whole life.”

In fact, he had spent his career writing fiction and reporting for the New Yorker and the New York Times Magazine, but he had producer Tom Hanks behind him, as well as former Charles Manson prosecutor Vincent Bugliosi on his side. Bugliosi had spent twenty years researching and writing the 1,600-page tome Reclaiming History: The Assassination of President John F. Kennedy. “I’m a highly skilled journalist,” Landesman recalls, “but when I sat down to talk to Vince about this story, it was like I was in second grade all over again.”

Landesman’s road to Hollywood began inauspiciously. At Brown, he was turned down for creative writing classes. “Brown’s creative writing program skewed toward post-modernism, and that was never my thing,” he says. “I like narrative storytelling.” He concentrated in political science and fine arts (he’s also a painter) and taught in Kenya before enrolling in Cornell’s MFA program in creative writing. After completing his first novel, The Raven, he shifted gears to report on conflicts in Kosovo, Rwanda, Pakistan, and Afghanistan. “As a palate cleanser between novels, my agent suggested I cover Kosovo for the New Yorker,” Landesman recalls. “It was like I got bitten by a vampire. I spent the next ten years doing long-form journalism.”

Back in the States, he wrote investigative pieces for the New York Times Magazine, and Hollywood took note. His 2004 report on sex trafficking, “The Girls Next Door,” inspired Kevin Kline’s 2007 movie Trade. But when MGM botched its adaptation of an art forgery story, Landesman says, “I read the screenplay, which was terrible, and thought, ‘Hell, I can try this myself.’”

He caught Tom Hanks’s eye with a script about Watergate FBI Agent Mark “Deep Throat” Felt. Although that script has yet to be produced, Hanks’s Playtone production company asked him to adapt Bugliosi’s Reclaiming History as an HBO miniseries. The network ultimately passed on the project, but Landesman refused to give up. “I realized there’s a ferociously entertaining movie in the material, so I rewrote it as a feature on my own time and my own dime and went to Tom [Hanks] with it.”

“Parkland is not about the principals,” Landesman explains. “It’s about everybody else. Their stories that day are more fascinating and in some ways more important because they represent the rest of us. Parkland is about what happened that day to America.”

Reader Responses to When JFK Flatlined