Bill Clinton, sitting in an upholstered chair by the fireplace in the Oval Office, listens intently as Janet Yellen, the chair of his council of Economic Advisers (CEA), discusses whether Asia’s weak economies will have a serious drag effect on the United States. They won’t, she predicts during this meeting in October. Other members of the president’s economic team, including Vice President Al Gore and Treasury Secretary Robert Rubin, weigh in. Then Yellen, a small woman engulfed in a nearby sofa, wraps up the late-morning briefing. 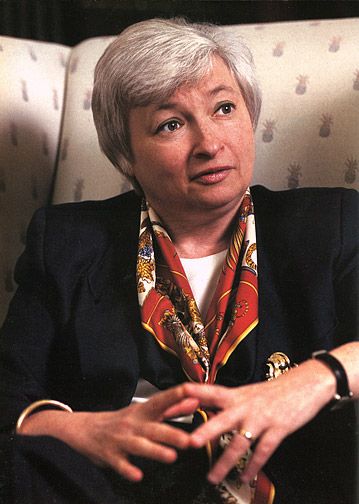 John Eisele
Thirty years ago, a young philosophy concentrator switched to economics. Now she's giving advice in the White House.
“Face time” with the president is prized inside the White House, and as lead author of the CEA’s weekly ten-page economic briefing, Yellen is guaranteed a regular spot on Clinton’s calendar. Even when the President cannot sit down with Yellen, he plows through her briefing, often asking her to get him more information on topics addressed in her dense, engagingly written reports.

In a workplace regularly consumed with affairs of the hour, Yellen and her thirty-five-member staff are responsible for big-picture economic assessments: the strength of the recovery, for example, or the impact of reforming social programs. “When the President is talking to members of Congress about the causes of job dislocation or the decline in welfare rolls, he repeatedly cites Janet’s analyses,” says Gene B. Sperling, director of the National Economic Council. “She’s the voice of analytical integrity that everyone on the economic team looks to when we deal with difficult issues.”

It’s a job that Yellen never imagined she would do when she was an undergraduate more than thirty years ago. She began as a philosophy concentrator, but after courses with professors George Borts and Herschel Grossman, she switched to economics. “They taught me that economics was a subject where a systematic way of thinking about the world translated into policy prescriptions with real social impact,” Yellen recalls. “I remember sitting in Herschel Grossman’s class and thinking, ‘Gee, I didn’t realize how much influence the Federal Reserve has on the health of the economy. If I ever have a chance at public service, [a Fed post] would be a worthwhile thing to do.’ “

In 1994, Clinton named Yellen to the board of governors of the Federal Reserve, plucking her from the economics faculty at Berkeley, where she had worked with the President’s former economic adviser, Laura D’Andrea Tyson. Yellen was already well known among economists for several highly regarded studies justifying an activist monetary policy that she had published with her husband, Brooking’s Institution economist George Akerlof. For any economist, a job on the seven-member Fed board is a rare chance to have a direct impact on the economy. The board of governors, along with the presidents of the district Federal Reserve banks, controls monetary policy by setting interest rates.

Three years after appointing Yellen to the Fed, Clinton asked her to chair the CEA. For Yellen, the decision to give up the relatively cloistered world of the nation’s central bank for an office next to the West Wing was “the chance of a lifetime. This was a job that was so important, I never even dreamed of doing it. But when the President asks you to do something and thinks you can do it, ‘yes’ is the only possible answer.”

In the White House, politics has become a bigger part of Yellen’s job. “The Fed was pure policy, pure substance,” Yellen recalls in a voice redolent of her native Brooklyn. CEA issues are more varied and directly influence national policy; the President’s economic decision-making spans everything from raising or cutting taxes to protecting the ozone layer. With a Republican majority in Congress, “some things that I might personally believe are desirable are just not going to be ‘on’ because they don’t command sufficient acceptance,” Yellen says.

One of Yellen’s strength, George Borts says, is that she doesn’t wield a political agenda. “I think it’s very hard to describe her politics,” he says. She sees a useful role for economists to play in policy, and she believes in incentives and markets. She is very much in the New Democratic tradition.”

Yellen has described herself as a “non-ideological pragmatist”; she is influenced by the Keynesian school of economics, which favors government intervention in markets and a benign attitude toward moderate inflation. Her philosophy complements Clinton’s centrist approach to reducing government’s role while providing a safety net of social programs.

As the U.S. economy heads toward a seventh banner year of recovery, Yellen praises the Clinton-backed 1993 budget law, which cut spending, invested in key programs, and raised taxes. “It’s not an accident that we’re enjoying a strong economic performance,” she says.

But even Yellen is surprised at how tame inflation has been. “Is something different happening?” she muses. “I think the answer is yes. We hope we will continue the pattern of favorable surprises where there’s money flowing into the Treasury and deficits are lower than we forecast.” She won’t count on it, though. “Our role,” Yellen says, “is to be hopeful – but skeptical.”